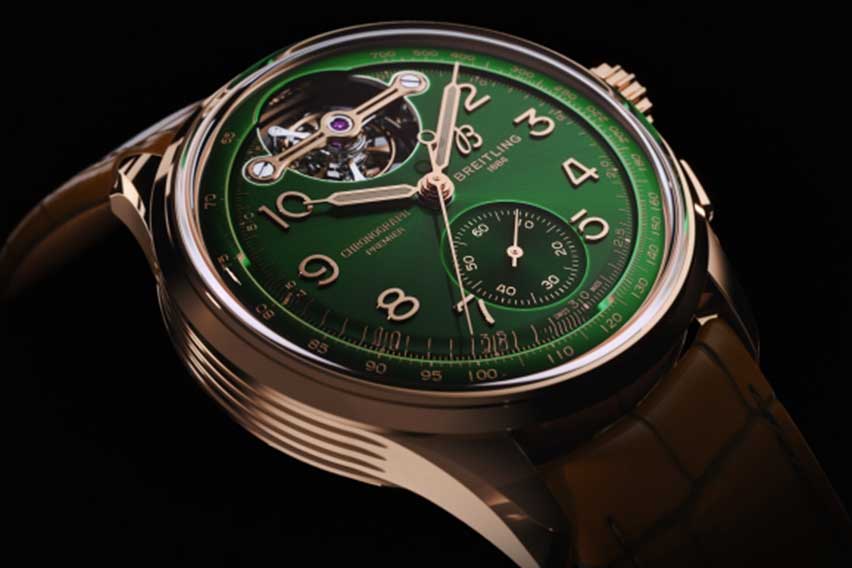 MANILA: After almost 20 years of collaboration, Bentley Motors and noted watchmaker Breitling celebrated the release of the Premier B21 Chronograph Tourbillon 42 Bentley Limited Edition, with only 25 pieces produced.

The timepiece is a reinterpretation of the original Breitling Premier wristwatch launched in the 1940s. The Premier B21 Chronograph Tourbillon 42 Bentley Limited Edition holds a distinct yet iconic style.

The watch has a gold-brown alligator strap, rectangular chronograph pushers, a 42mm case in 18-karat red gold, and a transparent sapphire caseback that displays the spectacular movement with its 22-karat gold oscillating weight.

The core feature is the exclusive cage and chronograph tourbillon caliber that are evident through the unique green dial, which is suggestive  of the British racing green color related with other models within the Bentley and Breitling collaboration.

The COSC-certified tourbillon movement, powered by the Manufacture Caliber B21, has a power reserve of about 55 hours and has water resistance of up to 100 meters.

Willy Breitling, who is the grandson of the brand’s founder, Leon Breitling, was an avid Bentley driver. In 1934, he handled the patent of the chronograph with two independent pushers at two o’clock and four o’clock.

Aside from being confident and tech-savvy, Willy Breitling recognized the desire for glitz and sophistication of watch enthusiasts.

Because of this, he designed the first Premier wristwatches in the 1940s, which served as the first connection of Breitling from intent to style.

As Willy perceived it, “When a man puts on his watch, it is the unmistakable stamp of impeccable taste.”

The same thing can be said about all Breitling watches to date, and it also reflects how the customers of Bentley Motors feel about their vehicles. The new watch pays tribute to the legacy and contemporary ideals of both brands.

Bentley Motors asked Breitling to design an onboard clock for the Continental GT in 2002 and the collaboration of the two companies grew from there.

In the spirit of peerless precision and unprecedented elegance, the exclusive new chronograph pays tribute to Willy Breitling, whose watches transformed the face of timekeeping, and to WO Bentley, who founded the automotive industry.

More details about the Premier B21 Chronograph Tourbillon 42 Bentley Limited Edition watch can be found here.