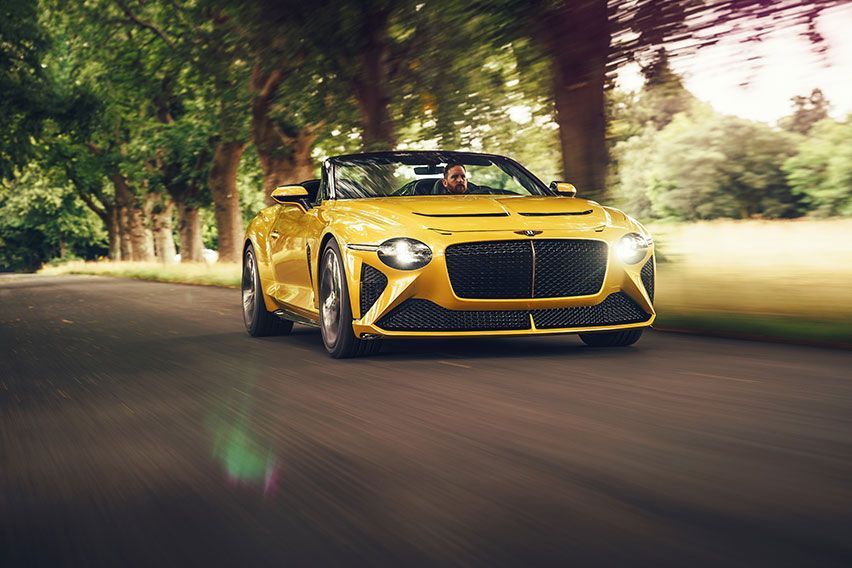 MANILA: Bentley is scheduled to go back to the magnificent Blenheim Palace from September 22 to 26 for this year’s Salon Privé, to reveal a three-strong showcase that the Bentley Mulliner has handcrafted.

The Salon Privé is regarded as UK's most exclusive motor show that features the latest supercars and the rarest iconic cars in the country.

As the in-house customized and personal commissioning section of Bentley, Bentley Mulliner is offering a trio of models to offer outstanding workmanship through and beyond the Bentley model line.

For the first time, all three models will be displayed together at the Salon Privé. A new member of the Mulliner Collections family will be revealed, along with a public release for the Bentley Mulliner Bacalar and a post-restoration launch of one of the most successful Bentleys in its history.

The Bentley Mulliner Classic offering was launched in 2019 with the announcement at Salon Privé that the 1929 Team Blower of the auto brand was to be resurrected with a new development of 12 supercharged 4.5-liter versions of the iconic vehicle.

The team of experts from Bentley Mulliner separately designed each of these models which will become the world’s groundbreaking pre-war race car continuation series. This subsection of Mulliner also accomplished a spotless restoration of the 1939 Bentley Corniche in 2019, which was introduced at Salon Privé during the same year.

For 2020, the Classic lineup will be represented through the revelation of the spectacular outcome of the last 12 months of work, which was done by a committed team of artisan craftspeople and engineers in the restoration of the brand’s own Team Car.

Sir Tim Birkin raced the Team Car, which was the sole vehicle that has given the blueprints and information for the Continuation Series.

The second vehicle, the Bentley Mulliner Bacalar, which is the distinct two-door Bentley of the modern period and the definitive expression of two-seat, open-air luxury, will also debut at the Salon Privé.

This final grand tourer oversees the Bentley Mulliner’s comeback to coachbuilding, as being the oldest coachbuilder globally.

Only 12 examples of the stunning, limited-edition Bacalar are being made, ensuring exclusivity and distinction, as well as providing ultimate luxury and spectacular efficiency.

Bacalar targets the future of handcrafted luxury motoring, wherein each model will be designed at the workshop of Bentley Mulliner in Crewe, depending on the personal preferences of the individual customer.

The Bacalar is the first vehicle to be designed as part of the new Coachbuilt lineup of Bentley Mulliner.

Through a roofless Barchetta design with all-new muscular coachwork embracing a multitude of materials and options, every Bacalar will be genuinely exceptional. This is regarded as the outcome of a direct connection between the individual customer and the Bentley Mulliner design team.

A pinnacle of workmanship, the Bacalar is a smooth combination of materials and an intelligent curation of technology. It builds on design DNA from the perfectly sculpted, esteemed EXP 100 GT, which was currently recognized as the “Most Beautiful Concept Car of the Year” at the prominent French Festival Automobile International and the “Concept Car of the Year” by GQ Magazine.

All samples of the elegant Bentley Mulliner Bacalar have already been distributed to customers worldwide.

The third portfolio, the Bentley Mulliner Collections, will continue providing customers flagship luxury variants of the key Bentley lineup, like the latest Continental GT Mulliner Convertible, along with the opportunity to customize their new Bentley.

A comprehensive range of options is available across the complete range of existing production cars — from hide and thread combinations, distinct color-matched paint to personalized feature material.

A new model will represent the Collections portfolio, which is set to be revealed the week before Salon Privé.

The R-Type Continental of 1952 was regarded as one of the most spectacular cars in history. Mulliner bodied more than 240 Bentley chassis in the 1920s and so the heritage of custom-built workmanship has been handed down from one generation to the next.

To pay tribute to the history of Mulliner, Bentley will also roll out two special vehicles from the Heritage Collection. The 1930 eight-liter, which was previously the company vehicle of WO Bentley himself, will lead a range of modern Bentley vehicles having an HJ Mulliner body at the event.

Being the fastest, four-seat sports car of the era, the signature beauty of the R-type continues to have an impact on the current design through the Bentley Continental GT.

The Salon Privé is the first live event that Bentley will participate since the COVID-19 crisis.

Bentley Mulliner requires all participants to wear face masks and temperature checks will be done before admittance. Social distancing will be closely observed between the staff and the attendees and a full track-and-trace system will be implemented for all visitors.

Also read: Bentley, OCTOPUS reach out to an e-powertrain future