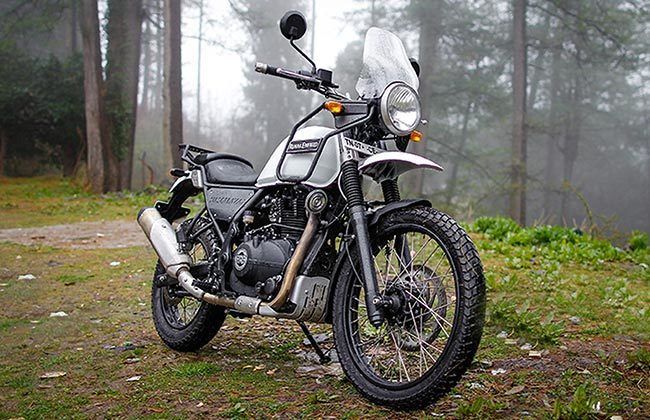 The Royal Enfield Himalayan though odd in terms of design comes with a functional simplicity. The obvious industrial focus to the design is what we found appealing. Also, during the test run, we realised that the Himalayan looks a lot better up close than in pictures. The build quality is pretty good as well. So to test it, we put the Royal Enfield Himalayan through a bumpy 650 km test, expanding over a period of two days. Over the course came multiple jumps and many off-road experiences, which resulted in falling off 3 out 4 plastic caps that this bike wears. Apart from that, it was entirely rattle-free.

The RE Himalayan is powered by an engine named LS410. Though it’s a new unit, frankly speaking, during the course of our trip it doesn’t feel like one. Rather it seems more like an improved version of the older unit. The 24.5 PS at 6,500 rpm developing LS410 is a counterbalancer-equipped engine. Vibration is well controlled and is only felt at rev past 5,500 rpm. From this point onwards, we began to feel the vibrations on the bars, seat, and pegs.

While crossing the highways, we realised that the Himalayan is best at 80 kmph in top gear, below 4,000 rpm. And it feels quite happy up to 152 kmph, just below 5,000 rpm in top gear. Post that the vibrations start shortly. The RM Himalayan reaches the 100 kmph mark in 10.52 seconds.

At this point, we soon realised that Himalayan performance sound is not as strong. One doesn't hear much of the bike, though it passes through the traffic easily and glides smoothly on the highway.

Also, during one commute, we spontaneously decided to up pace. And realised that when the gearbox stays in the sweet spot, the RM Himalayan proved to be super responsive and swift. We must say, it is one of the best commute options in Royal Enfield lineup thanks to the torque and its other abilities.

As for the mileage, the Himalayan returned 28 kmpl in city and 36 on the highway. Not bad.

Overall the performance is good with vibration being the only issue at high revs. Also, torque flow is effortless in the sweet spot.

Continuing our journey further, we realised that stopping the Himalayan is not an easy task. Don’t get us wrong, the brakes offer appropriate force but the problem lies with the state of tune. The bike with its solid 19-inch front wheel along with superb chassis offer great friendliness, enough feedback, and startling ability.

The RE Himalayan chassis contributes to its superb ride quality. Also, the Himalayan is fitted with a straightforward suspension. At the front is the 41 mm telescopic fork with no adjustment and 200 mm of travel. The rear gets monoshock with a linkage along with 180 mm of travel. In our entire course of the journey, we jumped quite a few times and somehow every time the bike was in control, thanks to its amazing chassis.

Handling, is both responsive and predictable, thus making the rider feel confident. The Himalayan comes fitted with the Ceat Gripp XL tyres, best for off-roading conditions and even perform terrifically during a rough patch.

We drove the Royal Enfield Himalayan for straight two days, and one thing that can be said for sure is that it is a comfortable motorbike. The seat works well during the long course and the handlebar position is good. There is, however, a sole ergonomic improvement that we would like to suggest, i.e., a slightly wider tank in the knee recess area. That’s because everytime a rider stands up, getting the knees into the tank is a bit of a task as the pegs and side panel are both wide. Also, we found the information console is quite dense in Royal Enfield Himalayan.

The Royal Enfield Himalayan is, without doubt, the best bike money can buy a prospective buyer. Its stellar chassis and high-on energy engine is something we'd unhesitantly recommend buyers to go forward with. For the price of RM 36,880, we strongly believe it's the best RE in the current lot. With the launch of 2018 Himalayan, we suspect many RE owners will either replace or add items to their garages.

So, when asked which bike is Malaysia’s only genuine off-roader? Surprisingly, the RM Himalayan is the one name that comes to our mind. However, I and my team feel that the new RM Himalaya could have been an even greater version of itself. And for it happens, Royal Enfield could have worked towards the crispness of the fuel injection system, healthier motor sound, and add ten more horses. With all this in place, the Himalayan would not only become the best Royal Enfield of all, but it might even be the most affordable premium motorcycle on offer in Malaysia.