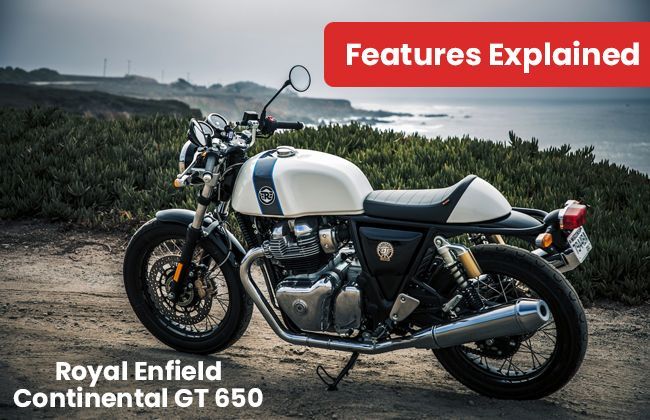 There is a lot of history attached with Royal Enfield. It has been making motorcycles for the longest of times and undoubtedly, has one of the most loyal and largest fan followings that any brand could have. However, in today’s day and age, RE products are mostly criticised for the use of dated technology which, in a way, had put the brand’s reputation on the line. So, to shut all those mouths and let the world know who’s the boss, Royal Enfield launched its brand-new Continental GT 650! A retro-styled cafe racer that seeks inspiration from the famous Continental GT 535 and is ready to set the charts on fire. Here are the top features of the Continental GT 650 that will make you fall in love with the bike.

Since it’s the first time a Royal Enfield motorcycle has a twin-cylinder engine, the company’s R&D team left no stone unturned and delivered a fantastic product. Powering the Continental GT 650 and its other twin, the Interceptor 650, is a brand-new 649 cc engine. It’s air-cooled and comes with an oil cooler. To keep things simple, there is a SOHC set up but we do have fuel injection. The engine produces 47 hp at 7,250 rpm and 52 Nm of torque at 5,250 rpm. REs are known for their immense pulling power and the Continental GT 650 isn’t an exception. Out of the 52 Nm, 80% of the torque is available at as low as 2,500 rpm! This makes overtaking a breeze, crawling in traffic in a gear higher a cakewalk, and accelerating off into oblivion a twist of the throttle away.

Another great feature of this parallel-twin engine is its smooth operation. Royal Enfield has worked really well to keep the vibrations in check. The only thing that you would feel while riding the new 650 is a slight buzz at the handlebars. But when you take the bike to the higher revs, some amount of vibes do creep in on the seat and footpegs.

As we mentioned earlier, the new Continental GT 650 looks very similar to the old model. And perhaps that is the best part. The design and styling of cafe racers are timeless. Thanks to the dual exhausts on the new CGT 650, you get a lot of road presence. Also, its engine is pretty big, so you do get that big bike feel while riding it. Royal Enfield has kept things simple here as well. There is no LED lighting on the entire bike. The round headlamp and the rectangular tail lamp are a nice retro touch. Royal Enfield has also introduced exciting new colours which also set the price of the bike. Talking about the price, the Royal Enfield Continental GT 650 price here in the Philippines starts at Php 375,000.

To give all the strength the new Continental GT 650 needed, Royal Enfield developed a new chassis. A twin cradle, tubular steel frame has been designed from scratch to offer the perfect combination of authentic styling and precise performance. Handling the CGT 650 is enjoyable. You don’t feel the 198 kg (dry) weight of the bike once on the move. It also handles well in the corners. Of course, it isn’t going to outperform a sportbike but that’s not what it’s meant for.

To keep the charm of the retro styling, Royal Enfield opted for spoke wheels. The new 650 twins come with 18-in front and rear wheels with 36 spoke aluminium alloy rims. They look fantastic and wear Pirelli Phantom Sportcomp tyres (100/90 at the front and 130/70 at the rear). These tyres were specially developed for only the new 650 twins. The only downside is they run on tubes, so you do have to be careful.

Royal Enfield Continental GT 650 specs include a large 320 mm floating disc at the front which is complemented by a twin-piston ByBre calliper. At the rear, there is a 240 mm disc. This set up provides a great braking performance which should be sufficient to bring this heavy motorcycle to a halt. Also, there is a Bosch dual-channel ABS.

Royal Enfield broke its silence with a loud bang with its new 650 motorcycles. While the Interceptor is more of a tourer, the Continental GT 650 is a pure cafe racer. We listed some of its top features but words don’t do justice to the kind of motorcycle it actually is. To know exactly what we are talking about, you will have to ride it yourself.