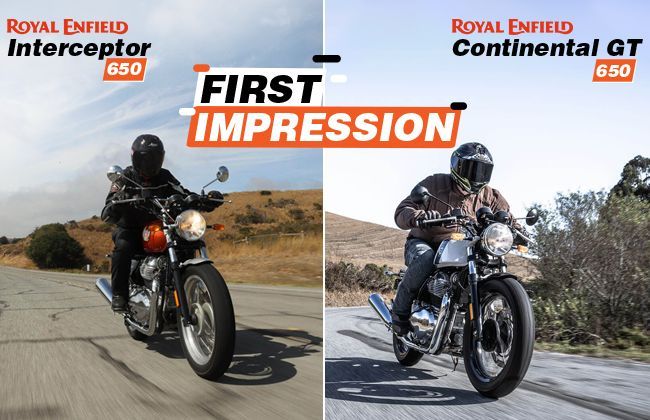 It was in the 1970s when Royal Enfield motorcycles had a twin cylinder engine on them for the last time. Fast forward nearly over four decades and we have a brand new parallel twin powering two Royal Enfield heart-throbbers. Yes, you guessed it right, we are talking about the newly launched Royal Enfield Interceptor INT 650 and the Continental GT 650.

While the two twin-cylinder retro motorcycles have seen the light of day here in the Philippines in 2019, the pair was already unveiled in front of the world way back in 2017. Better late than never though, and here we have two classic looking bikes. But do they deliver on the promise the manufacturer has been making since their introduction? Well, let’s have a look at their first impression and leave full a full-fledged review for later.

How do the design and ergonomics do?

Thanks to a new frame and chassis, the two motorcycles are now 20 per cent more rigid than the Continental GT 535. In terms of their design language, while the Interceptor INT 650 takes its designing cues from the Royal Enfield Interceptor 750 of the 1960s, the Continental GT 650 is pretty much the same Continental GT 535 which at its time was inspired by the Continental GT 250, Britain’s fastest 250 cc motorcycle in 1964. Most of the trim pieces on the GT are dipped in black, and on the other hand, the Interceptor is a chrome warehouse. Stuff like the twin-pipe exhaust setup, classic round headlamp, round rear view mirrors, twin-pod instrument cluster, turn indicators, tail section, mudguards, side panels, and wire-spoked wheel rims are identical on both the motorcycles.

Talking about the ergonomics of the two motorcycles, while the Continental GT is a cafe racer and thus comes with a more committed riding position, clip-on handlebars, larger fuel tank, and rear-set footpegs, the Interceptor is more of a relaxed roadster with an upright riding stance. The Interceptor also features forward-set foot-pegs, flat brat seat, and a raised handlebar. If you ask us about which of the two looks better? We’d say without a hiccup that the Continental GT 650 is the motorcycle to have on a weekend ride unless comfort is more important for you.

Where does the power come from?

Claimed to be simple, easy-to-maintain, and built for real-world riding, powering both the Royal Enfield Interceptor INT 650 and Continental GT 650 is a 648 cc 4-stroke SOHC air-oil cooled parallel-twin fuel injected TCI motor. As Royal Enfield says, while offering a very usable 47 horsepower at 7250 rpm and a maximum of 52 Nm of torque at 5250 rpm, the secret of the new 650 Twin lies in the way the power is delivered.

Seamless throughout the rev range, 80 % of the maximum pulling power (torque) is available at as low as 2500 rpm. The use of 4-valves per cylinder increases the engine efficiency resulting in better fuel economy and performance. An under-stressed 9.5:1 compression ratio means less sensitivity to variances in fuel quality, while a twin throttle-body paired to a highly precise Bosch fuel injection & engine management system gives an instantaneous, predictable, and smooth throttle response throughout the rev range.

How about the ride, handling, and braking?

Statistically, the wheelbase, ride height, and the weight of the Interceptor INT 650 and Continental GT 650 are 1400/1398, 804/793, and 202/198, respectively. Thus, there is not much to pull the two apart in terms of data. However, it is when you sit on them when the differences shout out loud. The relaxed posture on the Interceptor and the committed one on the Continental GT will very much play a vital role in the customers the two bikes get. The engine gets a slipper clutch, hence, the shifts, particularly downshifts, are smooth as butter. With top speeds of around 161 kmph, both the motorcycles offer good stability on road, and surprisingly enough, the vibrations are very controlled and minimal.

The wheels, tyres, brakes, and suspension, all are identical on both the Royals Enfield motorcycles. Both the front and the rear wheels are 18-inch 36-spoke units clothed with 100/90 and 130/70 tyres, respectively. Braking duties at the front are taken care of by a 320 mm disc with Bybre callipers, while the rear setup is a 240 mm rotor also with ByBre callipers. There is also a Bosch dual-channel ABS for better braking efficiency. Talking of the suspension, both the motorcycles feature 41 mm forks with a travel of 110 mm up front and twin coil-over shocks with 88 mm of travel at the rear. In short, the bikes offer an optimum blend of comfort, feel, and precision.

Should you get one of these?