Results Out- Toyota Philippines makes it Big again in Sales 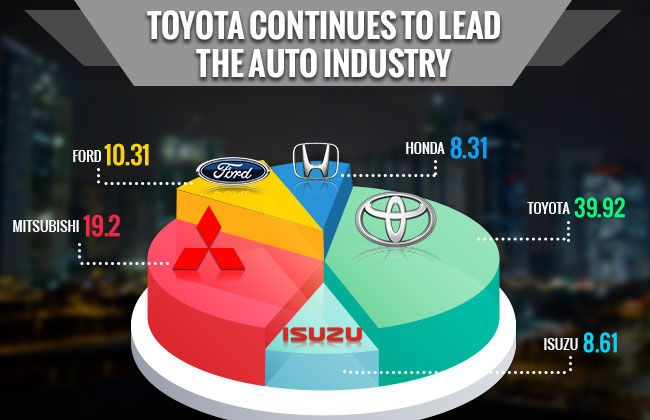 MANILA: Seems like it's a good commercial year for Philippines automotive market. Chamber of Automotive Manufacturers of the Philippines, Inc. (CAMPI) has recently announced the sales figures for the first quarter of this year and it's overwhelming. The agency declared that the Filipino automotive industry is just growing bigger and this is the fourth consecutive year where a decent hike in sales figures are recorded in the first quarter. The agency announced that there has been a jump of 22 percent in the sales of commercial and passenger vehicles between 1st January to 31st March 2016 in comparison to the same time period of the year 2015.

CAMPI has also revealed the names of the top performers where the world leader Toyota has again excelled in the Philippines with 39.92 percent of market share followed by Mitsubishi with 19.2 percent. The third place has been secured by Ford Philippines with 10.31 percent while Isuzu managed to grab the fourth step on the ladder with 8.61 percent having a neck-to-neck competition with Honda which was very close attaining 8.31 percent of market share but had to satisfy with fifth in-line. The critics have been analyzing this continuous growth and assume that the new technology, cars and offers introduced during the new year encouraged the customers to make their long due purchases. In April, Philippines observed MIAS 2016 and got really appreciative booking numbers. With such a great beginning and motivating figures, Philippines automotive market has a long way to go. Congratulations Toyota for making it big again!