Euro-styled Volkswagen Santana GTS drives as well as it looks 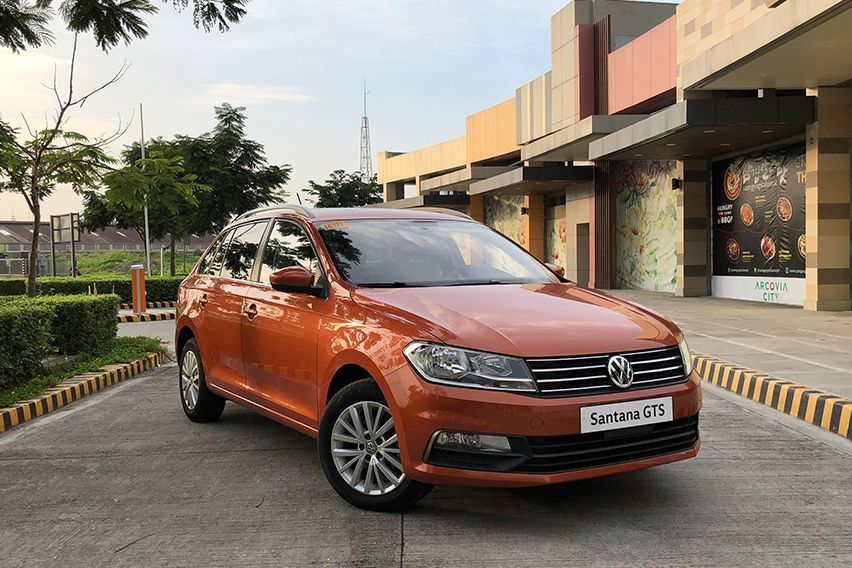 As a motoring journalist, it’s always great to know when a brand or trim is doing well in the market, so it was awesome to hear from Volkswagen Philippines execs that the Santana GTS was selling out.

This station wagon version uses the same platform as the VW Jetta, which is one of the brand’s compact four-door sedans in the market. This may be our first, but we’re already getting the fifth-generation unit that, according to the German automaker, has been improved in both looks and performance.

Coming from the maker of the beautiful Golf, it’s easy to see where it gets its looks. Taking some cues from the Mk7, it looks pretty robust from all angles. It barely has any curves and utilizes straight lines on the body; visible along the hood, sides, and even the rear.

Even the halogen headlights are somewhat shaped and sized like the one the Mk7 uses, but the grille is where it’s different. It’s chromed out, uses the basic four-slot type and is wider. Fog lamps are standard.

The rear package is prim. Taillights are large, wrapping around the rear fender before spilling over to the sides of the hatch. The only accents are a chrome garnish at the bottom of the tailgate and a roof spoiler. 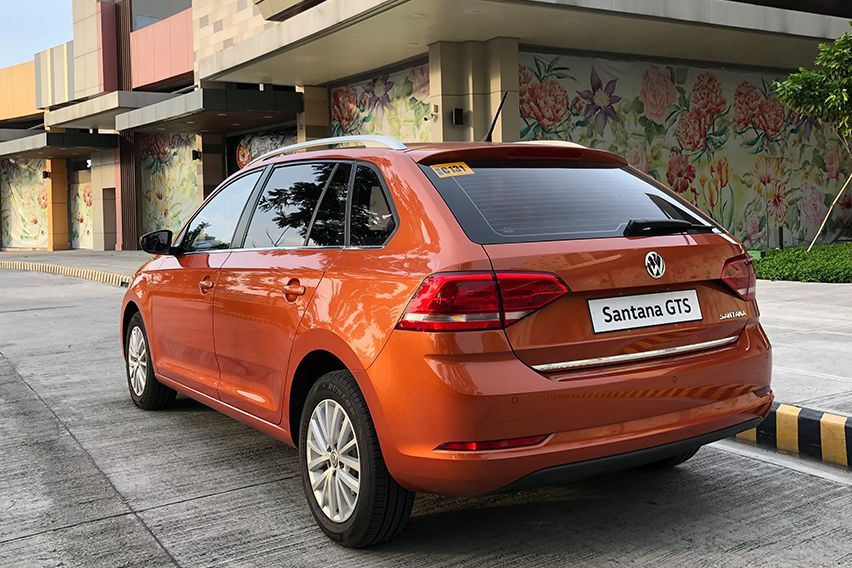 Wheel size is 15, but I’d definitely recommend something bigger to match its sporty looks.

The Santana GTS has keyless entry but it uses a key-in ignition system.

The first thing about the cabin is its roominess. There’s just plenty of palpable space above and even leg and elbow room.

I love the all-black motif that, even with the all-plastic build of the dashboard, doesn’t feel cheap at all. The design is good, befitting its status as a German car, plus that red line cutting across the façade of the dashboard expressing the GTS heritage of the trim is a very nice touch. 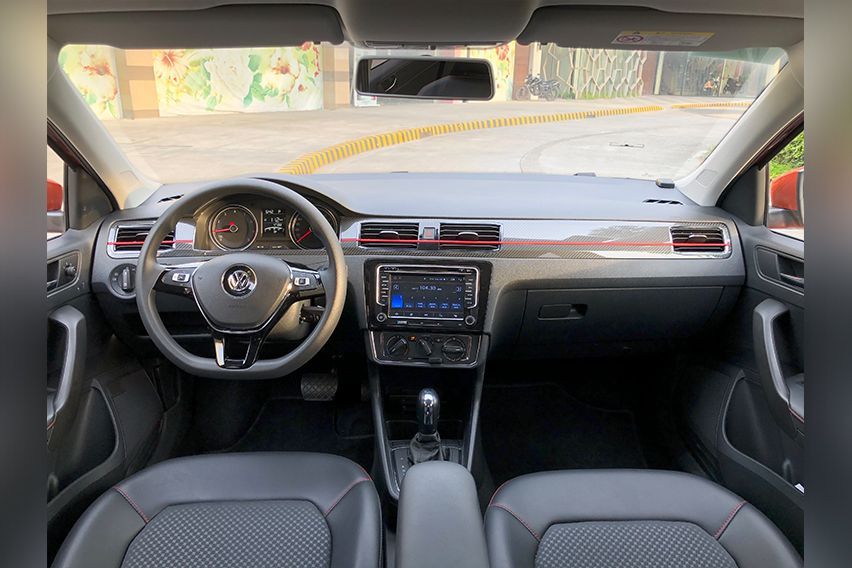 But that’s not the only red in the cabin. There’s red stitching on the leather-fabric combo seats as well but how it fits, is its best feature. Seldom do you get really good seats in a relatively cheap car, but this is an exception. While it may only be six-way adjustable, it really was snug to the body and propped me up with a good view of the road ahead.

The steering wheel is loaded with controls on both side stalks, audio on the left and for the multi-information display on the right.

A pollen filter comes standard in the climate control system. This will come in handy if you’ve got allergies and may help reduce your chances of catching a virus through the aircon. Aside from filtering pollen and other allergens, it also traps dust, smog, and other chemical pollutants.

I’d give it additional points for style with the sunroof and the silver roof rails. This trim is the higher of its two options because of the third-party system Blaupunkt audio system and this might actually be its only downside. The interface is slow and each input takes a split-second to switch and show on the seven-inch touchscreen. The six speakers do a decent job, but not great. Graphic user interface is old and is decades behind what’s commonly seen in modern units. My advice is to get the entry-level GTS (the one without the Blaupunkt system), save P31k and spend that on a better audio system.

What does make this a really good buy is the engine-suspension combo — a 1.5-liter engine and its six-speed automatic transmission held up by McPherson independent front suspension and composite torsion beam semi-independent rear suspension.

It manages the 108hp and 150 Nm of torque very well in order to make it responsive to input, whether from standstill or while overtaking. The engine sounds throaty, which is always good to hear from behind the wheel.

It feels a tad stiff, but just enough to give excellent driver feedback while making it feel firm and planted through twists and turns. And despite the stiffness, it does so very well to manage noise, vibration, and harshness levels that you can go through a rough patch and barely feel it in the cabin.

Surprisingly, comfort is also good and how VW manages to provide both is something to be thankful for. No need to figure out the why here; just enjoy the pleasant and fun ride it delivers.

All in all, it’s just one of those hatchbacks that drive great and I believe would be perform very well on the highway and up winding roads to Baler.

It’s priced at P1.029 million, but if I were you, get the sub-P1 million unit sans the Blaupunkt and design the sound system yourself.

Why so affordable, you may ask? As it is China-sourced, the tariff is only at just 0.6% but don’t think for a second that quality has been compromised. Production of each unit still strictly adheres to the same global standards of Volkswagen, and it shows in its poise and performance.

People from VW PH say the Polar White is the heavy favorite, but I’d personally pick this orange hue for sure.

With a price that’s just right and a performance to match the looks, it’s not hard to see why the Santana GTS is slowly becoming Volkswagen’s bestselling model.