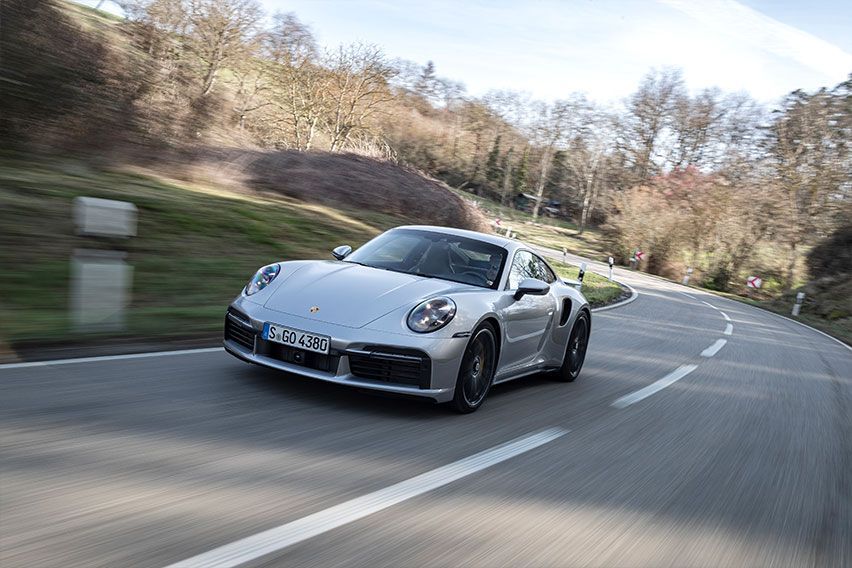 MANILA: Porsche is touting the all-new 911 Turbo S, which is now available in the Philippines, as one that raises the sports car benchmark — with the commensurate performance to back this claim up. First off, the vehicle is powered by a six-cylinder, 3,745cc boxer engine producing 650ps and 800Nm (an output 70ps and 50Nm more than previous engine’s). This power plant, mated with an eight-speed Porsche Doppelkupplung (PDK) transmission speeds the 911 from standstill to 100kph in only 2.7 seconds – onward to a top rate of 330kph.

The Stuttgart-headquartered carmaker says the 911 Turbo S can cover a quarter mile in 10.1 ticks, and calls it a “drag race king.”

Even as it is based on previous 911 Carrera engines, the all-new 911 Turbo S mill “now features a completely redesigned charge air cooling system, two new larger variable turbine geometry (VTG) turbochargers with electrically adjustable wastegate flaps, and piezo injectors. The turbine wheels are larger by five millimeters, to 55 millimeters, while the 61-millimeter compressor wheel is now three millimeters bigger. The wastegate flaps are electrically controlled by stepper motors,” according to a Porsche Philippines release.

The company also reveals that a new intake system “swaps around the previous routing of processed air and charge air cooling,” to enable a portion of the processed air to flow into the Turbo’s intakes on its flanks. “Two other airflows have also been incorporated through the rear lid grille, meaning the all-new 911 Turbo S has four larger intakes. What the updates resulted in are much improved engine responsiveness, power, torque, emissions and revving ability,” adds Porsche.

An all-wheel drive system that receives an enhanced Porsche Traction Management unit — allowing the drivetrain’s transfer case to distribute more torque. Up to 500Nm can be transferred to the front wheels. A new Porsche Active Suspension Management chassis makes the Turbo even sportier.

The 911 Turbo S is also wider by 45 millimeters (at 1,840mm) in the front and by 20mm, boasting a 42mm increase in front track and by 10mm in the rear. For the first time in the 911 Turbo S, the car is fitted with mixed-size tires — 20-inch 255/35 in the front and 21-inch 315/30 in the rear.  “Adaptive aerodynamic features now include controlled cooling air flaps at the front and a larger rear wing. The redesigned, pneumatically extendable front spoiler and the larger rear wing deliver 15% more downforce, too,” reports Porsche.