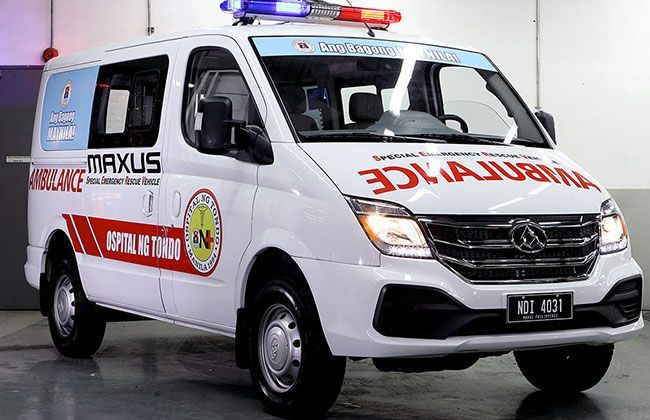 MANILA: Last Monday, Maxus Philippines donated a brand new Maxus V80 Flex ambulance to the Ospital ng Tondo. The donation marks Maxus Philippines’ support for the local government of Manila’s efforts towards the Mayor Isko Moreno’s “Ang Bagong Maynila (A New Manila)” projects. One of the goals under this is to improve healthcare services for the residents of Manila.

The new Maxus V80 ambulance is a three-seater van specially customized by Winterpine Marketing Corporation. The vehicle features an LED toplight equipped with a siren and public address (PA) system. The exterior has the official decals and vinyl sticker ambulance markings. It was also fitted with a stainless steel bumper and stainless ramp approach.

The inside of the van was also modified to fit various apparatuses. A two-layer medical floor-mounted cabinet was fitted inside the ambulance. Maxus also supplied a fully collapsible stretcher with a locking mechanism.

The ambulance is powered by a 2.5-litre VGT-equipped CRDi diesel engine capable of generating 134 hp and 330 Nm. According to Maxus, the periodic maintenance service (PMS) interval schedule for the V80 Flex ambulance are the first 5,000 km and every succeeding 10,000 km, or once a year. This is standard with all Maxus vehicles.

The turnover of the Maxus V80 was held at the Bonifacio and Katipunan Shrine in Ermita right across Manila City Hall. The ceremony was led by Felipe Estrella, President of Automobile Central Enterprise, Inc (ACEI)., and Reginald See, General Manager of Maxus Philippines. ACEI is currently the exclusive  importer and distributor of Volkswagen and Maxus vehicles in the Philippines.