The Toyota RAV4 2.5 LTD is all squared up for a modern adventure 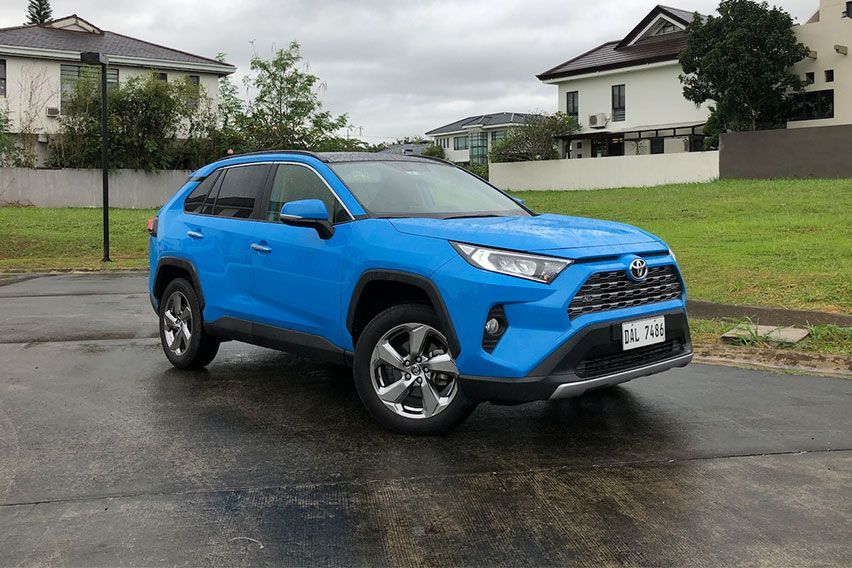 Seeing this fifth-generation model makes me think about the FJ Cruiser, albeit smaller, less burly, and a lot sharper around the edges. It carries that same adventurous charisma minus the Hulk-like exterior. It all comes from the squared-up shape, from the roof, hood, wheel arches, and even the lines that frame its façade. It exudes a certain amount of machismo expected from a “recreational activity vehicle” (RAV), although it did give up its four-wheel drive ability.

The slim vent in between the auto-levelling parabola LED-type headlamps keeps it in line with the “keen look” of modern Toyotas and is a nice complement to the hexagonal shape of the grille and its apertures.

The panoramic moon roof seems completely flat, and that trend continues in the rear spoiler and elements around back, including LED taillights and the hatch window.

When you look at the vehicle, it almost feels like Toyota tried as much as it can to flatten the exterior, which is a huge departure from the rounded surface of the first three models and the very angular shape of its predecessor.

The driver gets an eight-way power seat with lumbar support and a memory system to remember preferences of three drivers; the front passenger gets a four-way adjustable seat. At P2.203 million, expect leather seats with a heater function; leather on the steering wheel, shift knob and door panels; and an electronic parking brake with brake-hold.

In the instrument panel is a seven-inch display with a cool feature – it can switch between an analog and digital speedometer with just a touch of a button. Extra audio controls along with cruise controls, can be found on the steering wheel.

As the top-of-the-line model, it has a keyless, smart entry system and a start/stop button to engage the 2.5-liter engine. There’s a new “floating” touchscreen that handles the infotainment system. It still has a CD player and Aux input, which I doubt anyone will use, and Bluetooth that can pair two mobile devices for telephony features but a whopping five devices for music streaming.

It has six speakers, an automatic dual-zone climate control system, but my favorite is the large wireless charging pad right in front of the shift knob. The reason I like it is because it works. I’ve tried the one on the Santa Fe, which was iffy at best. It will charge initially, but then stop just seconds into it. The one in the RAV4 will keep on charging until you turn it off, even if your phone wears a thick case.

It’s a spacious five-seater whether you’re sitting in front or in the second row. Plus, it has a large trunk which can handle significant amount of luggage/cargo as evidenced in the picture, and if you’re carrying more, fret not because the rear seats fold 60:40.

Our first taste of Toyota’s Dynamic Force engine is with the RAV4. It has a higher compression ratio at 13:1 (compared to the previous-gen, same-sized RAV4 engine), which gives it an extra 27hp and 10Nm of torque.

It doesn’t feel as powerful and even feels the way it looks on Eco mode but not to say it’s slow. The response to throttle input is a tad slow, which helps keep the revs under 2,000rpm for better fuel economy.

Response is heightened in Normal mode, and then raised to almost-instant level in Sport mode. You’d be fine in Eco mode 99.9% of the time, but if you want to get some action and excitement in the drive, Normal would be good enough. Sport would be overkill with all the traffic in the city, although I can imagine it would feel great along open provincial roads where you’d occasionally need the power to overtake jeepneys and tricycles.

The eight-speed direct shift feels smooth. Go heavy on the throttle and it stays in the same gear for better acceleration sans the shift shock. Keep your foot light and it gently manages all of its 203hp and 243Nm.

Its crossover side delivers a very comfortable ride. It feels like you’re in a Camry almost, but with the benefit of high ground clearance. I barely noticed it go over road imperfections and even the effects of large cracks are hushed by its high level of noise, vibration, and harshness dampening.

On the safety side, it comes with front and rear sonar, back-up camera, seven airbags, hill climb assist, and even trailer sway control. This model is so nice in many ways – including the Cyan Metallic hue – and that says a lot about this compact SUV. Its size makes it formidable on city streets and even the highway, and it also translates to more space in the cabin. It takes in a lot of cargo, which is good for hauling or those long weekends out of town, plus it’s a very comfortable drive.

The Toyota RAV4 LTD may look like a total square but with its space, power and comfort, expect nothing less than a fun adventure with each drive.