Toyota Yaris: Power and proportions made for the metro 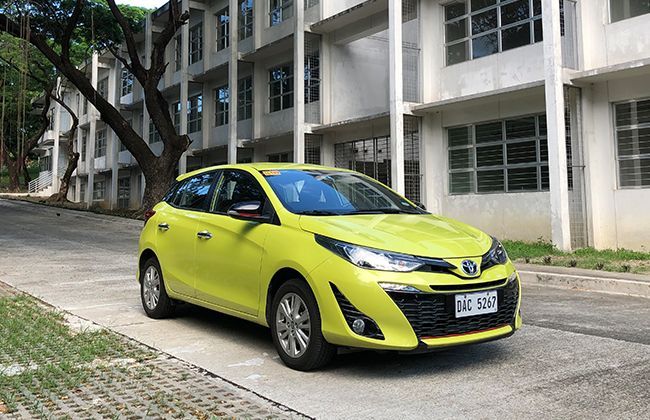 If the Vios were any prettier, it would be the Yaris. I honestly believe that. Its color alone, Citrus Mica Metallica (a Yaris exclusive), makes it such a looker and a virtual eye magnet.

Look at the sheet metal and see how much more expressive it is with those lines along the hood and the sides that just pop out creating more shape on its subcompact body.

Last facelifted in 2017, it finally adopts the "Keen Look" that’s been on the Altis and various other Toyota models for several years. Let's take a closer look at the Toyota Yaris 1.5 S AT

Its slim and elongated halogen projector-type headlamps (with daytime running lamps) stand out as it sits on top of that large blacked-out grille with mesh that makes it look just a little Lexus-y.

Wheel wells seem big enough to accommodate wheels bigger than the stock 15s to up the sportiness a little further.

Just like the previous-gen Yaris, the pillars are also blacked-out creating that "floating roof" illusion but it looks much better on this model because the rear LED combination lamps are longer and slimmer, which wraps around the rear fenders to give a much better visual effect.

The reshaped tail also makes it look more compact by putting the rear badge higher and on the glossy surface found right below the glass.

The cockpit has been completely redesigned. It's flatter now on top and with a horizontal pinch along the brim and faux red stitching that traces out the center stack. There’s a lot of open surfaces here and chrome accents to highlight the infotainment system and the aircon vents.

Aircon controls, center vents and the seven-inch touchscreen are now all housed in a glossy panel that sets it apart over the plain plastic dashboard around it.

Paddle shifters are located behind the steering wheel, which comes with red stitching, too. Audio controls are on the left stalk.

Seats are fabric with a colorful abstract design pattern along the middle just like the previous model and matches the red stitching in the cabin.

Ceiling height and overall space is sufficient but it does feel more compact in the rear with the sloping roofline.

The engine remains the same, a 1.5-liter with Variable Valve Timing with Intelligence (VVT-i) paired to a continuously variable transmission (CVT).

I love the new gearbox. Without the four-speed restrictions of the previous AT, I can hear it hum instead of groan, and throttle response was much more direct.

As a small vehicle, it's apt that steering is light and fun, which also made the unit feel so agile.

Even with only 105hp and 140Nm of torque, it easily kept pace with fast traffic at 5 a.m. on EDSA, but where it really shines is during bumper-to-bumper traffic because that’s when it can showcase its swift and deft moves.

It certainly has enough spunk to make you look forward to the daily drive and you could even take it on the highway, so long as you don’t expect an 86-type performance.

As the top trim, this breaks the seven-digit mark and is priced at P1.065 million. For that amount, I expected the comfort level to be higher than most in its segment, and it didn’t disappoint.

It was quiet in the cabin and made even the bad parts of EDSA sound like the good parts of Ayala Avenue. I was Bluetooth streaming my songs all the time, and that’s all I heard during the drive.

Handling was terrific because of its low and sloping roofline. Without a trunk, it sashayed into corners gracefully with barely a hint of body roll.

The new design took a few inches away from the cargo area but it should fit at least four pieces of medium-sized (check-in type) luggage easily.

It has SRS airbags for the driver, passenger, and even driver knee, side, and curtain shield as well. That’ pretty comprehensive protection for this segment that’s for sure.

If there’s one thing I’d need it to have as a top-of-the-line unit, that would be a reverse camera.

That being said, it wouldn’t be too much of a task to park this baby as it is pretty compact with the hatchback body, but I do expect the next update or the fourth-gen launched in Japan early this year (when it comes here) to sport this.

Other than that, this package is designed just right for the city life. Aimed to deliver doses of fun as a daily drive, the Toyota Yaris 1.5 S AT is small and compact, looks great, drives efficiently, and most of all, metro-chic for the modern motorist.