5 Below Php 50k underbones that will not disappoint you 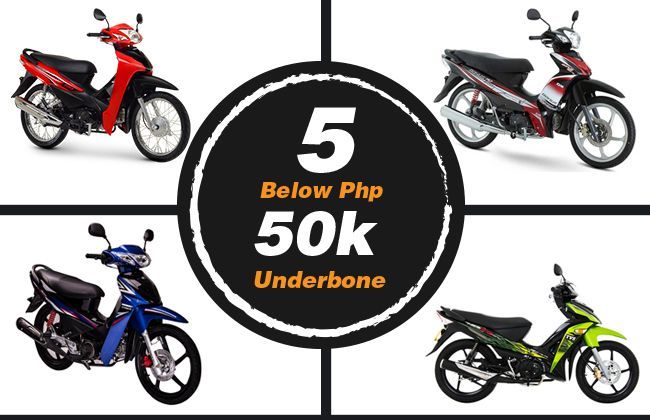 50000 Peso might seem like a lot of money. But in the world of underbone commuter bikes, it brings up the lower end of the market. That does not mean that there is any dearth of choices here. On the contrary, there seem to be just too many bikes here. So many, that it is extremely easy to make a wrong decision and be stuck with a bike that spends more time on its side than on its wheels. And once you’ve bought yourself a lemon, getting rid of it becomes even more difficult. Yet there are a few gems here that often stay hidden. But worry not. We bring to you here, a list of 5 of the best underbones that will not disappoint you. These 5 bikes are arranged in order of decreasing price.

The SYM Bonus 110 is not exactly going to win any design contests. But the headlight cluster with integrated indicator lamps does give it a distinct identity. The rest of the bike though is a very good copy of the Honda Wave. The Taiwanese motorcycle manufacturer manages to sell this underbone for a very affordable php 47800. Unlike the Malaysian market, SYM does not sell the hotter version of the Bonus here that comes with alloy wheels. Still, the bike comes in stylish colors with blackened exhaust and engine components. The engine powering it is an air cooled and carbureted 110 cc single cylinder that produces a not too shabby 7.1 hp and 7.45 Nm of torque. It uses a 4 speed rotary transmission. The whole thing weighs just 98 kg meaning that it gives great mileage figures too getting up to 55 km/L. The bike comes with a 3.8 L fuel tank and surprisingly – a disc brake in the front. A very good effort by the Taiwanese maker indeed.

You probably did not expect the premium Japanese motorcycle maker here and yet here it is. But in truth it was no surprise to find the Wave Alpha here. It has in fact ruled the low cost market for over 15 years now. Honda will even sell you another variant of the bike that comes equipped with alloy wheels that still does not cost more than Php 50000. Powering the sub 100 kg bike is a 109 cc engine producing 7.57 hp and 8.54 Nm of torque and uses a 4 speed rotary transmission. That torque figure makes it suitable even to be used as a tricycle. The mileage figure as expected is an impressive 60 km/L. Being a Honda it is also extremely reliable and refined. And then there is the badge that ensures a good resale price. No wonder this bike has ruled the country in sales for so long.

The other SYM on this list is the SYM Bonus X. It is the smaller brother of the SYM Bonus 110 comes with a 100cc engine. Everything else seems to be exactly the same. Why they chose to name it X is anyone’s guess. The styling is almost exactly the same. The engine is smaller by 10 cc. The transmission is also the same 4 speed rotary unit. The company has thankfully left the front disc brake unchanged from its elder brother. This too weighs in at a lightweight 98 kg and delivers good fuel economy. A very good choice for those seeking the cheapest mode of transport.

The other Taiwanese motorcycle manufacturer has a very promising underbone on offer that makes a name for itself by being extremely cheap yet being somewhat well equipped. It’s weird how the lower we go down the price range the more well equipped the bikes get. The Kymco Visa R keeps up with the trend by coming equipped with alloy wheels and a swanky red accented 220 mm front disc brake. The bike’s styling also gives it some sporty character. It is powered by a 107 cc engine that produces 4.8 kW and uses a 4 speed transmission. The company sells three different variants. The top of the range Commuter variant also comes equipped with a built in top case. A very good deal by any measure.

The Philippine undebone market has recently been under Indian invasion by TVS motors. The third largest motorcycle maker in India sells one of the freshest takes on the cheap underbone segment with a host of innovative features. The design is also innovative with indicators mounted on the side of the apron. The bike’s Duralife engine uses high pressure lubrication to ensure low friction and longer engine life. The TVS Neo XR also produces an impressive 8.5 hp and 8.5 Nm of torque. The front gets a dual piston disc brake on 17” wheels. The bike also comes equipped with an onboard mobile charger and an economy indicator on the instrument panel. Being the cheapest bike here, the others on this list need to step up their game.