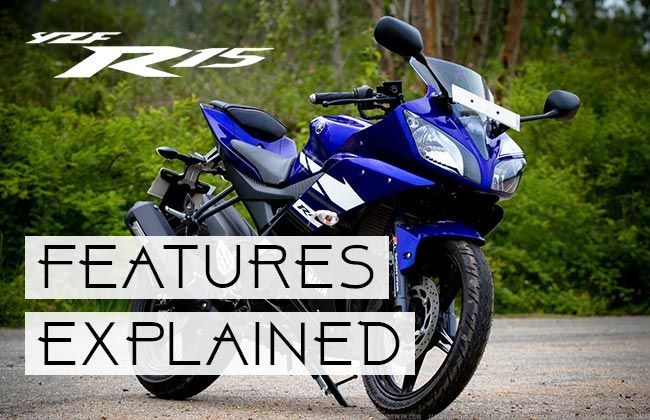 Launched in 2009 in its first generation avatar, the R15 captured the hearts of the enthusiasts. However, feedback was sent to Yamaha that the motorcycle’s rear tyre looked very thin.

Yamaha worked on this feedback with a 130 section tyre at the rear in the second-generation model that came out in 2012. Now, with the third generation, Yamaha has addressed the need for more power as well as modern amenities. A quick look at the YZF-R15 specifications shows that the motorcycle now has been developed from ground-up. It bears no resemblance to the first or second generation motorcycles either.

So, let’s take a look at the features of the new Yamaha YZF-R15.

Yamaha introduced the Deltabox chassis for a 150 cc motorcycle and it continues with the same unit in a modified fashion for the third generation bike. The R15’s swingarm is shorter now and accordingly the chassis has been modified. The wheelbase, as a result, is now 1,325 mm as opposed to the 1,345 mm in the second generation.  While the seat height has now increased to 815 mm, it doesn’t make a difference to the riding posture.

Upside down bigger 41 mm front forks are now employed while the rear has a revised monoshock unit. It uses a linkage function instead of being placed directly on the swingarm. The tyres too have been upgraded to fatter units now. The front boasts a 100/80 R17 while the rear now is a 140/80 R17 section instead of the aforementioned 130 from the older bike. All these additions have resulted in a motorcycle that is heavier by 3 kg now. The total weight is 137 kg.

That’s right! The new YZF-R15 specifications indicate that the motor is a 155 cc unit. The bore has been increased while the stroke of the engine has been retained. Compression ratio too has been bumped up to 11. If you look at the power, then it has increased from the 17 PS earlier to 19.3 PS. Torque though remains the same at 15 Nm. Yamaha claims to have used new forged pistons, bigger throttle bodies, a new connecting rod, rebalanced crankshaft, and a new fuel injection system. All these and the resultant changes to the internals has lead to lower thermal efficiency losses.

If you thought that was all, then you are grossly mistaken. The Yamaha YZF-R15 specifications also point towards the inclusion of Variable Valve Actuation or VVA. There are two intake valves. One boosts the spread of torque at lower and mid-range revs while another one is activated as the rev needle climbs above 7,600 rpm. While there is no indication anywhere if the VVA is activated at lower engine revolutions, the secondary one is informed through the meter console. Peak power produced is also a higher rpm - 10,000 as opposed to the 8,600 earlier. The top speed is rated at 138 kmph, which is nearly what some 200 cc machines achieve.

Yamaha has also added a slip and assist clutch. What this basically does is reduce the clutch effort. Shift aggressively from 6th gear to 4th and the rear wheel will not slide or hop. It though isn’t a full-on slipper clutch and gear shifts still require the use of clutch.

The Yamaha YZF-R15 also brings in a lot of equipment on board. Starting with the much bigger and expensive R1 styling. The fairing is reminiscent of the same. It house LED lights in two rows, with a false air intake in the middle. The carbon fibre inspired front mudguard too is a piece of art. The same theme continues on the fuel tank as well with false air intake scoops being added. For the instrument cluster, a fully digital integration has been used. There is also a shift light available as well as the usual tell tale lights.

The seats are split unit like before, however, the pillion unit is a much better padded one this time. While it may not be apparent from certain angles, the R15 does have well-sculpted grab rails which are integrated into the body frame. A look at the tail light will leave you confused if you are actually following a R15, R3, R6 or the R1. Nonetheless, it is a LED unit and a very good looking one at that.
Disc brakes are provided at both ends. However, Yamaha has chosen to give ABS a skip altogether. This is a miss by Yamaha on what otherwise is a brilliant package.