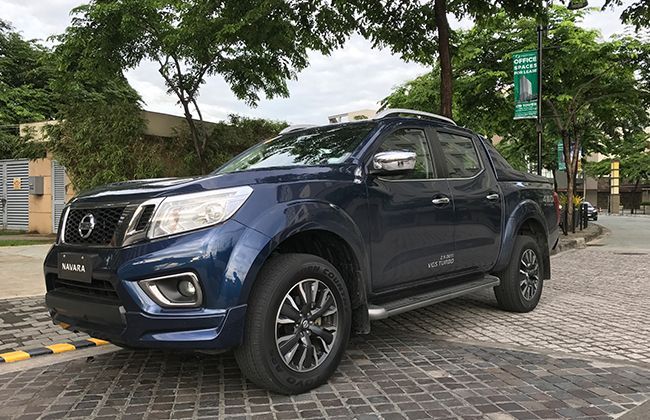 It’s been a while since I was in a Navara. I remember happily gunning it through the La Paz sand dunes in Laoag, Ilocos Norte some five years ago when the third-generation model made its local debut. Talk about a rough and slippery start.

I even vividly remember certain details like lowering the pressure on each tire to 13psi to cope with the sandy surface, but with limited slip differential, traction control,  vehicle dynamic control, active brake limited slip, hill start assist and hill descent control, the sand dunes never had a chance to bog down the Navara.

I got a hold of the top-trim Nissan NP300 Navara 2.5L VL 7AT recently and highlight here the five features that make it one beast of a truck, even in the city.

The Navara’s YD25 engine may only have a displacement of 2.5 liters, just 500ml more than the biggest soda bottle, but what’s impressive it what it does with the little it has.

With variable-geometry turbocharger and an intercooler, it surges forward with even just a hint of throttle pressure. Despite shift points being just at or a little over 2,000rpm, it still managed a very respectable 8.3 kilometers per liter in pure city driving.

It feels wonderfully aggressive because of its quick response and tailpipe notes that penetrate the cabin.

Output of 190hp and 450Nm of torque feels raw as it hits the four-wheel-drive layout via a smooth-shifting seven-speed automatic, similar to what the Infiniti QX80 and the 370z sports coupe uses.

Front independent double-wishbone with coil spring and stabilizer suspension and a rigid five-link suspension with stabilizer in the rear make it feel somewhat sedan-like inside, but that’s only on near perfect road conditions.

Dry conditions in this country will put some auto air-conditioning systems to shame, except maybe for Nissan.

It’s a reputation that precedes the brand and continues to be literally one of its coolest features. Even without tint, this unit managed to keep the cabin temperature extremely comfortable, which isn’t something you can say about some of its competitors.

Plus, it didn’t even have to be at the highest setting all the time, which makes it cost-effective.

I stress this feature because it’s a high priority for us to combat 24/7 and 365-day heat and humidity.

The cherry on top of this cool feature are rear aircon vents installed right behind the center console so that the quick-cooling effect may also be felt by second-row passengers.

While it may not be an exclusive feature, it is pretty spacious for a pickup truck. The exterior dimensions remain relatively the same, including the cargo capacity of the bed, which makes it an easy drive around cramped streets and tight parking spaces.

But inside, laptop bags, gym gear, and other hand-carried items are an easy compromise even if you have other passengers hitching a ride.

It even has a couple of cup holders that pop up in the second row right along the center tunnel (in between the rear passengers).

It doesn’t matter if you’re practically city-bound and very rarely go off-roading. It’s still cool to have a digital compass (it comes installed on the rearview mirror). It never hurts to know the direction you’re headed, especially for the geographically challenged. So, next time, you can actually tell if you’re north or southbound.

Besides, there’s just something very manly about going “I’m on EDSA headed north” when the girlfriend calls to check on you. Makes you sound in-the-know and in control.

Another great feature I like is the rearview camera. It’s always a great idea for trucks to have it so you don’t have to make size as an excuse that you can’t park like a pro or look like a noob when you’re making a two-point turn.

It’s actually an optional accessory, but one you should definitely get not just because it looks good, more compact and shorter, but it also increases the body’s rigidity, which reduced the overall noise, vibration and harshness (NVH) levels of the Navara VL.

Aside from aesthetics and its effects on NVH, it also adds a high-mount stop lamp on the Navara. You can never go wrong with an additional safety feature.

Based on these five alone, this truck turns into a beast in looks and performance.

Backed by a strong and efficient engine, this top trim is endowed with a monster package that includes exterior, interior, safety and ease-of-use features that will be hard to top.

Don’t be fooled by its innocent looks: The Nissan NP300 Navara 2.5L VL 7AT is a total beast of a truck in more ways than one.