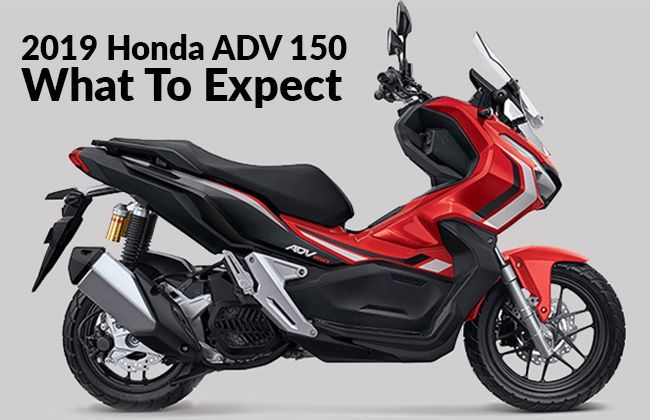 Latest reports suggest that Honda Philippines is soon going to launch its brand-new ADV 150 scooter in the country. The Japanese giant has recently released a teaser of the same which can be considered as an indication that Honda is indeed planning to bring it in the Philippines sooner than expected. So here is what you should expect from the ADV 150.

The 2019 Honda ADV 150 was unveiled in July at the GAIKINDO Indonesia International Auto Show (GIIAS) 2019. It attracted a lot of crowds and became the centre of attention. It is quite likely that the Philippines variant of the ADV 150 would be very similar to the one available in Indonesia.

Honda ADV 150 is based on the X-ADV, Honda’s most popular adventure two-wheeler and the class 2 winner of the gruelling 7000 km Gibraltar Race. That’s why it is going to be like no other scooter that we have seen in its segment in the country.

In terms of design, it is way ahead of the other 150 cc scooters. It features a bike-like front end with dual LED headlamps that impart an aggressive look. The side fairing makes sure that the scooter looks bigger than it actually is and it sweeps up towards the rear end for the added sporty feel and appearance.

When it comes to the engine, the 2019 Honda ADV 150 specs would have a 150 cc, single-cylinder, liquid-cooled unit with an SOHC setup and Honda’s ESP (Enhanced Smart Power). It produces 14.5 PS of max power and generates a peak torque of 13.8 Nm. It is the same engine that is employed in the Honda PCX150 and should be sufficient to have some fun with.

Since the ADV 150 is the younger sibling of the X-ADV, we think it deserves to be called that, it would get some features that would help it to act as an adventure scooter. For example, it would have a large windscreen which should be manually adjustable. Also, the suspension duties on this thing would be handled by a set of standard telescopic forks at the front whereas the rear would get twin gas-charged springs, a first for any Honda automatic scooter.

To take you to places, the Honda ADV 150 would also come with knobbier tyres which Honda like to call as semi-dual purpose. They should work brilliantly both on and off the tarmac and would go well with the scooter’s overall design and image. For braking, the ADV 150 would get a 240 mm disc brake at the front and a 220 mm disc at the rear. Having disc brakes on both the wheels isn’t a common feature in the 150cc scooter segment. And on top of that, Honda would also include its CBS (Combined Braking System). We do hope that Honda also provides ABS, at least as an option.

Some of the other features that are expected to find their way in the ADV 150 include Honda Smart Key and alarm system, 28-litre under-seat storage, DC charger, and a fully digital instrument console.

As of now, there is no official confirmation by Honda as to when it would actually bring the ADV 150 in the Philippines or about its price. Speculations are made that initially only 150 units of the ADV 150 would be made available per month because of its huge demand overseas. Well, we hope Honda would pull some strings and wouldn’t keep its fans and customers in the Philippines waiting too long for the ADV 150. Regarding the price, it should fall in the range of Php 140,000 - Php 169,000.

Also Read:- Honda ADV 150 ready to launch in the Philippines