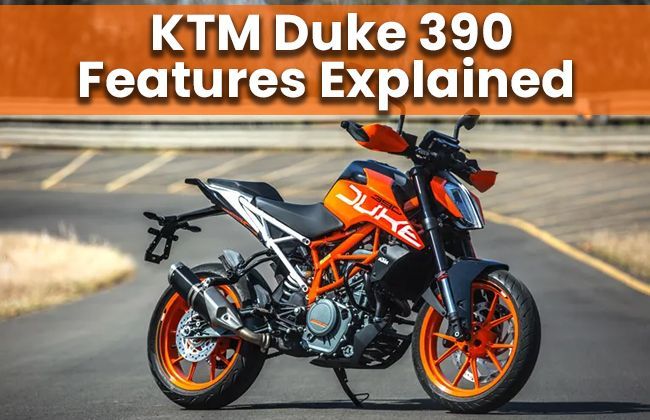 ‘You can’t go wrong with a KTM.’ That’s the kind of impression this world-renowned Austrian manufacturer has earned. Usually known for its motocross and adventure motorcycles, KTM caused a buzz in the market when it launched the Duke 390 a few years ago. It completely thrashed the competition with its technical specs, price, and outright performance. Its funky design wasn’t everyone’s cup of tea but it successfully created a space for itself in many hearts. After years of ruling the segment, KTM knew it had to upgrade its street bike line-up to stay in the game. And that’s when the new KTM Duke 390 enters. Here are some of its key features as its formal introduction.

The Duke 390 continues to charm its customers with its lunatic power. It’s just unbelievably quick. KTM was able to create a fabulous engine back when the first Duke 390 came out, so it didn’t play around much with the internals in the new model. The new KTM Duke 390 specs still list the same 373 cc, single-cylinder, liquid-cooled engine which churns out a fun 43 bhp of max power and 37 Nm of peak torque. But this time the power delivery is not as instant and abrupt as it used to be on the previous model. KTM toned it down just a bit.

The previous KTM Duke 390 had a major issue - it felt extremely jerky and unstable at lower speeds and RPMs. To sort this out, KTM added ride-by-wire in the new model. So, there’s no throttle cable controlling your throttle inputs instead there’s a computer to that job. This made the throttle movement smoother, crisp and precise.

We always felt that the brakes on the old Duke 390 were not up to the mark considering how fast the bike can go. They felt a bit spongy and lacked initial bite. KTM solved that in the new model. With a large 320 mm disc at the front and a 230 mm disc at the rear along with the aid of an anti-lock braking system and sintered pads, the braking performance of the new Duke 390 is significantly improved. It also comes with adjustable brake and clutch levers. And the 139 kg dry weight of the bike makes it easier to drop anchors at any time.

This is one of the best new features of the Duke 390. Most probably, it is the only bike in its segment and price which provides such an advanced and good-looking full-color TFT display. There is a tonne of information to read. You can browse through the menus using the switchgear on the left side of the handlebar. It features Bluetooth connectivity allowing you to connect your smartphone with it. It can show calling information but unfortunately, we don’t have navigation support.

The headlamp of the new Duke 390 has been completely redesigned. It now looks so much more than that of the mighty SuperDuke 1290. There are many LEDs installed in the headlamp which do a brilliant job in lighting up the dark. Also, the LED daytime running lights look superb thanks to the design and use of good quality LEDs. Using so many LEDs will generate a lot of heat and to make sure all that is dissipated properly, KTM cleverly designed a heat sink in the middle of the headlamp. It seems to be a part of the headlamp, doesn’t mess with the overall look and gets the job done too.

Another clever and interesting feature of the Duke 390 is its new sub-frame. It extends out from the main-frame towards the rear and makes up the entire rear-end of the bike. This has been achieved without compromising on the integrity and structural capability of the frame. The bike is as nimble and agile as it was before. But in case of an unfortunate accident, the sub-frame will be easy to repair/replace without affecting the main-frame which will reduce the overall repair cost by huge margins.

The underbelly exhaust has been replaced by a new lighter, good-looking side-mounted exhaust. This has been done to meet the stricter emission norms. Also, this exhaust system gives the bike higher ground clearance thus, better for even off-roading. And, of course, the exhaust note of the new Duke 390 is so much better than the previous one.

Finally, it is the new design of the Duke 390 that simply blows the competition away. KTM has done a fantastic job in revamping the entire motorcycle to make it much more similar to its higher-end products. There is no ugly-looking vertical headlamp. Sharp contours and cowls make the bike look much aggressive; exactly what a naked streetfighter should be like. The fuel tank is of metal which means you can slap on a magnetic tank bag when touring. The tail lamp is new. We like the new graphics as well.

So these were some of the key features of the Duke 390. You have to ride it, guys, and we’re sure you’re going to love it. It is that good. It is a fun and fast bike to ride but you also need to be extremely careful with it because it reaches triple-digit speeds in no time. You have to be aware of what you’re doing. Available in two colours - orange and white - the KTM Duke 390 price is Php 299,000.