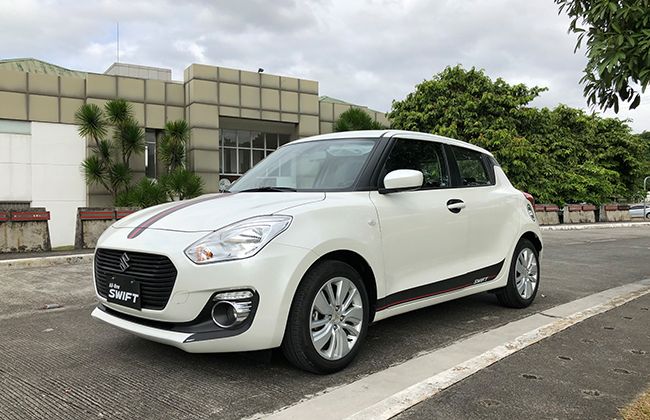 One of the most popular subcompacts in the country made the almost decade-long wait absolutely worth it, as it now comes with a new body, redesigned interior, and improved performance.

The styling of this fourth-generation Swift doesn’t depart too much from the previous model, it’s still clearly much sexier in more ways than one.

Noticeable is the much larger windscreen with a more upright angle compared to its predecessor while the roof is a little flatter, which takes after its much larger sibling, the Vitara.

It has much shorter overhangs because of the new Heartect platform, which makes the fascia look especially sporty. The hexagonal blacked-out grille is bigger, wider, and is framed by the vehicle’s front edge, separate from the much shorter bonnet.

The headlamps are a little smaller but still come with halogen bulbs, while new daytime running lamps are now integrated in the fog lamps housing.

Adding flair to the exterior is a stripe coming down the middle of the hood, along with the stickers on the door handles and the bottom of the doors. All of these are optional accessories.

Suzuki’s new platform shortens the Swift’s overall length by 10mm, which necessitated the redesign of the rear door handles. Its new location, near the top of the C pillar, helps in creating the appearance of a "floating roof."

Now it looks leaner and even more compact, which actually improves performance without taking anything away from the cabin space.

Under the rear glass is a nice horizontal pinch along the sheet metal that slightly extends the hatch for style, plus new rear LED combination lamps on both sides.

As this is an entry-level model, the keyfob needs to be clicked to unlock and key it into the ignition to start the engine.

One of the freshest aspects of the cabin is the new dashboard, which is laid out following a theme  evident on the circular vents and gauges. The overall hue is primarily all black with a white horizontal stripe on the dash and door panels that pleasantly breaks the monotony.

Controlling the infotainment system is a seven-inch touchscreen with several buttons lined up below it and a two dials on each side – one for volume and another for changing frequencies.

Operation is fairly simple and it even comes with Bluetooth technology and a USB port (found just above the cupholders).

After making several hands-free calls though, I received feedback that my voice sounded faint, which may mean a mic upgrade or repositioning is in order.

I like the red rings around the gauges in the instrument panel but this one doesn’t have the 3.5-inch LCD screen (available in the GLX-CVT) in the middle. It does have a trip computer though.

It’s spacious inside – five will be a comfortable fit – thanks to the Heartect platform which increased the wheelbase by 20mm for a larger cabin and increased luggage capacity (by as much as 25%).

The feeling of spaciousness is intensified by the overtly high ceiling, which is good, but the one drawback is it puts the small visors further away than I wanted to. As this unit was without tint, the visors were too far to block sunlight ahead or even from the driver’s left side.

Same engine, no problem with the Heartect platform. The underbody is now 30 kilos lighter, which allows the 1.2-liter K12M engine with 82hp and 113Nm of torque feel more powerful than its output suggests.

Acceleration comes with just the right amount of urgency. It doesn’t lurch forward or was it sluggish.

The five-speed manual transmission is easy, smooth, and compliant. While it doesn’t have sports car power, the short throw and close gear ratios make it a fun drive. The clutch is light and shift action makes it easy to shift into the next gear.

The engine revving at 3,000rpm was barely audible in the cabin. Even road noise was near muted. Ride comfort is a commendable 9/10 for vehicles in this segment.

Handling feels more direct and immediate, and with its compact design, short overhangs and a minimum turning radius of 4.8m, it’s a pleasure to drive around even in traffic.

In pure city driving I averaged 9kpl, and while the package managed to managed to be fun and exciting despite the small displacement engine, I was hoping for an above-10 average.

Priced at just P755,000, this base model achieves many things while looking really good and without even trying too hard.

A bonus feature is a pollen filter to keep your nasal passages from being offended by Metro Manila allergens.

The Suzuki Swift GL 1.2 M/T could be your daily beater, with the looks of a keeper, and the performance that will make you come back for more.