This is how the new Mitsubishi Mirage feels 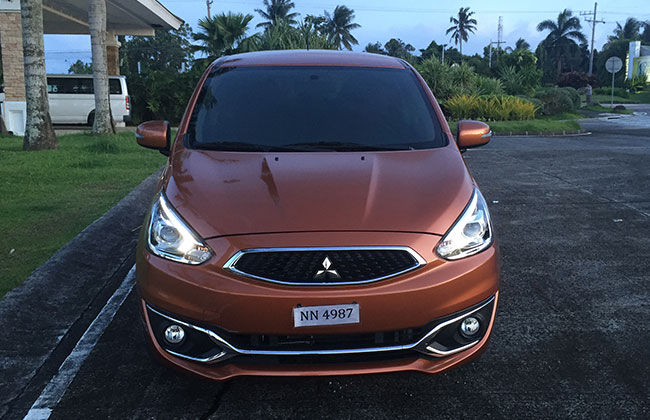 When I was told that I have to test drive the new Mitsubishi Mirage, I felt excited. You see, my mother-in-law was one of the first people to get their hands on the then new 2013 Mirage G4 GLX, and I’ve been using that particular car as a daily driver for the past year. I also know for a fact that the hatch and the G4 are basically the same car, they just have different body styles. And here I am, describing the experience of the new Mirage.

It’s quite a looker, this car. The front and rear bumpers have been widened a bit to add more beef to the overall design. Our test car is the range-topping Mirage GLS, and it comes with a stylish front grille and a new lower grille with chrome garnish.

Our test unit also came in Sunrise Orange Metallic paint, which is exclusive to the Mirage GLS. I didn’t like the colour at first, but the playful nature of the car is an exact match to this paint tone. It is sporty and energetic, yet quite elegant, if that makes sense.

The 15-inch two-tone alloy wheels are wrapped in 175/55/R15 Bridgestone Potenza tires, a brand that I highly trust. The tires are still a bit skinny for my taste, but driving this car on the highway revealed a surprising attribute that I wish I felt on our old Mirage G4. More on that later.

Enough about the exterior for now. Let’s answer the most important question of all: how does the new Mirage drive?

Mitsubishi Motors Philippines Corporation (MMPC) was gracious enough to lend me the new Mirage Hatchback for a whole week, and I can tell you a lot of great things about this new and improved model.

Let’s start with the seats. They are firmer and more comfortable, and the front seats have been re-sculpted so you can reach the backseats without putting too much strain on your shoulders and back. Our old Mirage G4 had tall seats that were sculpted in an awkward manner. If you ever tried reaching for your backpack in the rear seats while settled in the driver’s seat of the old Mirage G4, you’ll know what I mean. Besides this, the tall headrests also managed to impair rearward visibility, which was not the case with the new Mirage Hatchback.

After settling myself in the driver’s seat, I parked my foot on the brake pedal and pushed the starter button. The engine sound is more muted this time, and there is an overall sense of refinement inside the car. We’ll talk about the interior later, let’s get down and dirty with the new Mirage.

Our test car is fairly new, with less than 2000 km on the odometer. I didn’t get a chance to push the car to the limit due to time constraints, but I can tell you that a lot has been done to make the Mirage Hatchback a better driver’s car.

The steering feels a bit heftier than the one set-up of our 2013 Mirage G4, but it’s not overly heavy to be baptized as cumbersome. In fact, it still feels wonderfully light in city driving, and it feels most pleasant when you find yourself hustling to a rather tight parking spot.

But the big surprise is how the steering feels when the car is driven at speed. It is now tighter, and it now offers better control. I have always clamored for the steering feel of my old Lancer GSR 2-door coupe, and most especially my Mitsubishi Galant saloon. Both of those cars have brilliant hydraulic steering, but this new Mirage Hatchback managed to rekindle the flame despite the presence of electrically-assisted steering. Fact of the matter is this: I can feel that the steering has been re-calibrated, and I love it.

The 3-spoke steering wheel itself is now wrapped in leather, and it comes with chrome and gloss black accents. The shifter also gets a splash of leather. Nice.

Crawling at a snail’s pace in heavy Santa Rosa traffic, the car feels light, nimble and agile. Once the road opens up, you can sense that the suspension has been upgraded as well. Where the old Mirage G4 will bounce and dive on uneven pavement, the new Mirage Hatchback feels taut, instilling more confidence to the driver. It is not what you would call firm or uncomfortable, but this is a big improvement over the suspension tuning of our Mirage G4. The suspension has been upgraded to deliver a better ride, but it is still a bit fidgety to be quite honest.

The old Mirage G4 has a tendency to lean on tight corners, even when approaching a particular corner at moderate speed. You will feel none of that in the new Mirage. The car feels more planted, and the steering tightens up as you lock the steering towards the turn. It feels good, it feels positive. The rear wheels will kick out a little to point the nose towards the curve. And mind you, all of this happens at moderate speed, which is good because it further increases the fun factor of the new Mirage.

The brakes offer a positive feel, although you can sense the ABS system working hard under cadence braking. I also felt the ABS kicked-in obtrusively when the front-right wheel was jarred by a meteoric pothole. This is not particularly a major issue, but it is important to mention it nevertheless.

The Mirage is powered by the same 3A92 3-cylinder engine with Mitsubishi Innovative Valve Timing Electronic Control System, or simply MIVEC for short. The good news is that the engine was tuned to produce 4 more horsepower over the previous model. The engine is now rated at 78 hp at 6,800 rpm and 105 Nm torque at 4,000 rpm.

Don’t believe what you read on other reviews. Yes, this is a small engine, so it would be foolish to expect neck-breaking acceleration. But it isn’t sluggish either, even when paired to the standard CVT automatic transmission. In fact, the car feels lively, and the engine delivers a smooth rush of torque when passing vehicles on the highway.

I can’t say that I felt the additional 4 horsepower, but for what it is, the 3-cylinder engine of the Mirage in general is more than adequate to motivate the car on hilly inclines, even with a full load of four passengers and a bit of cargo in the boot.

I also love the engine note, particularly when revving upwards of 4,500 rpm. I’m not one of those people that appreciate the hushed silence of a boring car even when driven aggressively. The small engine of the Mirage does not snort or bellow like that of a Boxer engine from a Subaru, but it doesn’t feel like a wimp either.

The Mirage has a more upscale interior. Let’s start with the instrument cluster. They are the same gauges as before, but they now have chromed accents and Optitron-style lighting. Mitsubishi calls it white-lit semi-high contrast meter cluster, which is a mouthful to be quite honest. It lights up the moment you start the engine, and the gauges are now easier to read even when hindered by the glare of direct sunlight.

The navigation system is integrated into the standard audio system of the Mirage. This Multimedia entertainment system with GPS navigation and touchscreen interface is a pleasure to use. It can remind you of merging roads ahead, and it can even tell you if there are speed cameras on the road.

Best of all, the GPS system will emit a beep if you are approaching the speed limit on a particular road, and it will beep twice when you have breached the speed limit. Believe me, I tried it myself. It will even warn you of a slippery road ahead. Don’t ask me how it works or how it does that, it just knows.

Not particularly a deal-breaker here, but when you think about it, when was the last time that an affordable city car came with a feature such as this?

The Mirage GLS also comes with an automatic climate control system, which makes it easy to adjust the temperature settings in this unbelievably hot and humid country. It performs quite well, and it can quickly cool a scorching hot cabin in less than 2 minutes, even if you are unlucky enough to be parked directly under the sun.

There is more good news: the new Mirage is now equipped with a floor center console box with armrest. The console box is big enough to hold your smartphone and phablet, and the cover doubles as a cup holder for the rear passenger.

My only complaint about the interior is the lack of headroom in the rear quarters, but other than that, the cabin is roomy enough for four adults. Five people can fit in a pinch, but vertically-challenged individuals will feel right at home inside the Mirage. I am 5’11” and I can fit perfectly in the front seats, and I feel fine sitting in the rear seats. If you stand more than 6’2” and you like to be chauffeured in the back seat like Donald Trump, this is not the car for you. I was also wondering why there is no vanity mirror on the passenger side, when MMPC was kind enough to install a large vanity mirror on the driver’s sun visor. Finally, the gloss black accents on the interior can scratch easily, and has a tendency to attract fingerprints and smudges.

There is also adequate boot space in the rear, but the Mirage G4 is the clear winner when it comes to trunk space.

The trunk of the Mirage hatchback is not what you would call cavernous, but if you fold the rear seats, you have more than 47.0 cubic-feet of space at your disposal.

The Mirage is equipped with dual SRS airbags, anti-lock brakes with EBD, and a reinforced body shell that protects the occupants in a crash. It is also good to know that the Mirage won the ASIAN ANCAP Grand Prix Award for adult occupancy protection in the mini car category. Which other small car can claim that?

Mitsubishi says that the new Mirage can achieve 21 kmpl, but the best that I got was 18.8 kmpl. This is not bad at all, considering that we were travelling in mixed city and highway driving, with occasional bouts of bumper-to-bumper traffic.

It is safe to say that the new Mirage is still one of the most fuel efficient cars in the market today, bar none.

The new Mirage Hatchback is better than before. In fact, I can dare say that it is way better than our Mirage G4. If you have particular concerns about durability and reliability, then think about this: our Mirage G4 is only 3 years old, but it has more than 120,000 kilometres under its belt. We never had a need to file a warranty claim, and the only thing that needs to be serviced or replaced were the engine oil, spark plugs, air filters, brake pads, tires and HVAC system.

The new Mirage comes with an impressive 5-year/100,000 kilometre warranty for added peace of mind. This new model feels tight as a drum, and I believe it will remain so even after many years of use and abuse.

If you are in the market for an affordable, stylish, safe, and feature-packed subcompact car, the all-new Mirage should be included in your shortlist.