2018 Suzuki Ertiga: Improvements that have been made 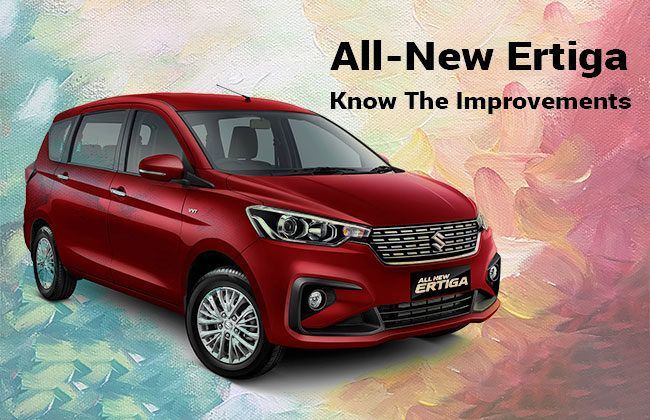 The Suzuki Ertiga has been around since 2013. It’s world debut happened in India and as most Suzuki products in the Philippines, even this one is imported from India. The Ertiga redefined the ways an affordable people mover was seen. It not only had features but was compact enough to fit most parking lots. The 1.4-litre petrol engine had decent grunt and was fuel efficient too. However, five years is a bit too long knowing Suzuki’s penchant to stay at the top of the game.

Always! So, a few days ago, an all-new second-generation Ertiga was unveiled in Indonesia. It is likely that this model will go on sale there first followed by the rest of the regions. The second-generation Ertiga bears a bit of resemblance to the first one, however, similar to the way the Innovas have evolved, these two are a size apart as well. Here is all you need to know about the new Suzuki Ertiga and the improvements in it vis-a-vis the outgoing one.

A discerning buyer will not be much interested in the platform that the vehicle is built on. But, here you, the reader, should be. This is because this is the same platform that underpins the new Swift, Baleno and the Dzire. It has made the Ertiga lighter than before. While Suzuki hasn’t come out with the details yet, like the Swift and Dzire, this one too should be less porky by minimum 80 kg. The Heartect platform revolves around agility, fuel efficiency as well as using lower weight components. Suzuki is thinking of using this platform as its base for the next upcoming vehicles. This will mean less investment for them in the way of development of newer vehicles as well as reduce manufacturing costs. Expect the new Ertiga to be then more nimble than before while at the same time maintaining ride quality.

Well, the new Ertiga has gone bigger than before now. It measures 130 mm more than the older car. It is also 40 mm wider and a negligible 5 mm taller too. The wheelbase though hasn’t been altered and stands at 2740 mm. Remember the aforementioned Innova and Crysta reference? Big seems to be the new mantra these days. While it is apparent that Suzuki wanted to make the Ertiga bigger, it would have worked better if they could have enhanced the space in the cabin. At least in the last row.

The Suzuki Ertiga looks much better than before doesn’t it? There is aggression in the way the grille has been designed. The headlights too seem petal shaped and house projectors now. It is highly likely that these are LED projector lights. Suzuki has recently started endowing all its cars this technology and we expect the Ertiga to also be at the receiving end of this benevolence. The bumpers at the front and back seem well defined as well. We like the new 16-inch alloys and their design. The floating roof treatment with the blacked out C-pillar looks very nice. It also shows the layman that the car is now bigger than before. The rear lights have a mix of Honda Jazz and Volvo XC60 inspirations. Overall, we like what the designers did with the new Suzuki Ertiga.

The interior hasn’t evolved much from the previous car. The new Ertiga carries forward the beige and black combination for the upholstery. However, now repulsive looking wood trim has been added. This wooden trim is also used in the new Dzire. Not sure how many like or prefer it though. The steering is a flat-bottomed unit with wood at the base. It houses the necessary buttons for calls as well as music. Cruise control too may be added, however, Suzuki hasn’t specifically said anything on it. A 7-inch floating touchscreen infotainment system is on offer too and it houses Android Auto as well as Apple CarPlay. Surprisingly Suzuki offers manual AC. We expect single climate control to be there in the top spec trims.

The front, as well as middle row of seats, are comfortable enough with both adjustable for reach. The third row still is good enough for kids but with the additional roof height, there is more headroom now. Boot space is now 153 litres, a welcome addition given that the outgoing model used to store 137 litres with all the seats in place. Toppling the third row gives 550 litres of boot space, whereas flattening the second row will yield 803 litres.

Suzuki has also added a new instrument cluster though we wish it could have a head-up display. 12 volt power outlets are available now for all three rows.

Added firepower under the hood

The new Ertiga also gets a 1.5-litre engine that has been specifically tuned for this MPV. The naturally aspirated motor makes 108 PS of power and 138 Nm of torque. It is mated to a new 5-speed manual whereas those preferring automatics will have to be content with the old 4-speed unit. Suzuki may also introduce an AMT box at a later stage.

The new K15B engine is more frugal than the older unit. It is rated at 18 kmpl for the manual and 16.7 kmpl for the automatic. Decent numbers these and are at a five percent improvement over the outgoing unit. Suzuki claims to have worked on the NVH of this motor to make it as silent as possible.

The new platform accords for better safety and takes into consideration even pedestrian protection. That being said, Suzuki has given the regular dual airbags as well as ABS with EBD as standard. However, the surprise package is the inclusion of electronic stability control and that too as standard. We hope that Suzuki gives an option of four airbags on the top spec trims.

With fresh ammo and new looks, the Suzuki Ertiga looks all poised to take on the competition namely the Toyota Avanza. It remains to be seen what the price tag will be. That is whenever Suzuki deems it fit for the Ertiga to be launched in the Philippines.