And the Oscar Goes to - Ford 1.0L EcoBoost 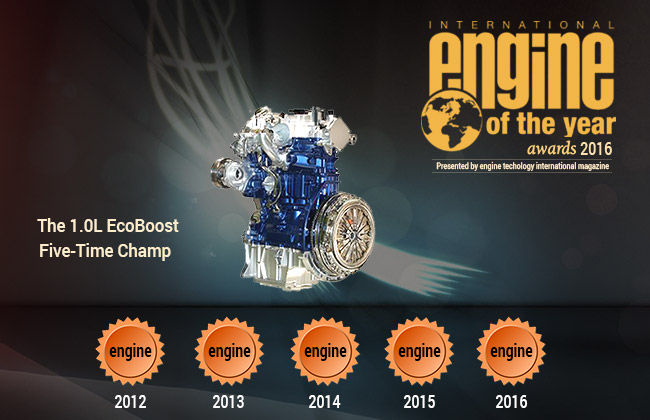 MANILA: It's the happy time of the year for Ford Motor Company, Why? if you may ask, it’s because its renowned 1.0L engine has got the biggest recognition of all times, International Engine of Year Award. Surprised! Well, you may be amazed, but for people who are close to the brand and knows the auto industry well, it's no scenario of amazement, as there is no better engine in the said 'small' category that is efficient enough to surpass EcoBoost perfection.

Now, time for knowledge gaining session on International Engine of the Year front -

As can be sensed from the name, International Engine of the Year is no less than Metro Manila Film Festival Award or Oscar event of Hollywood and has been recognising engines in various categories since 1999. Here, instead of the glamorous actors, you'll find bulky metal engines competing with one another and like the former they too are awarded for their performance, not on screen but on the road. The performance standards take into consideration factors like driveability, fuel economy, smoothness and noise. Coming to the jury, here also like the film award jury is present a panel of automobile journalist and critics from all over the world, scrutinising each nominee and recognising the best in the lot . Talking about this year, 65 motoring journalist from over 31 countries inspected the nominees on the above-mentioned criteria, coming to the conclusion that EcoBoost is the best performer of all, thus making it 'Best Engine Under 1.0L' for the fifth time in a row.

Ford Motor Company introduced the auto world to its now famous 1.0L EcoBoost engine in the year 2012 and since then it has been given the apt recognition of 'Best Engine Under 1.0-liter'. Look for its past performance and you'll know that this 1.0L from Ford has hit the top of charts in 2012, 2013, 2014, 2015 and now in 2016, as well. Earlier few years didn't saw many entries in the said competition, but since 2015 there has been a considerable increase in a number of eligible contenders, especially in the sub 1.0L turbo engines with direct fuel injection. Take, for example, this year 1.0L EcoBoost had to compete with as many as 32 qualified mills.

Ford EcoBoost technology is not just restricted to 1.0L capacity and is further available in options like 1.5L, 1.6L, 2.0L, 2.3L, and 3.5L. As for the 1.0L mill, it is tuned to give away varied power figures from 100 PS to 180 PS. Only a few knows that there is a road-legal Formula Ford fitted with the said engine that is capable of churning 205 PS and due to its exceptional 7 min 22 sec performance at Nürburgring, it is ranked above monsters like Pagani Zonda, Ferrari Enzo and Lamborghini Aventador.

Around the world, over 72 countries with over 11 Ford cars benefit from this multi-award winning engine, as for the Philippines market, we have two cars that feature the said engine, Ford Focus and Ford Fiesta.

Over the years, many companies tried imitating Ford EcoBoost design and tech, but none was able to achieve the success that was grabbed by EcoBoost. Here, are few things that make it class part and so likeable in the auto industry -