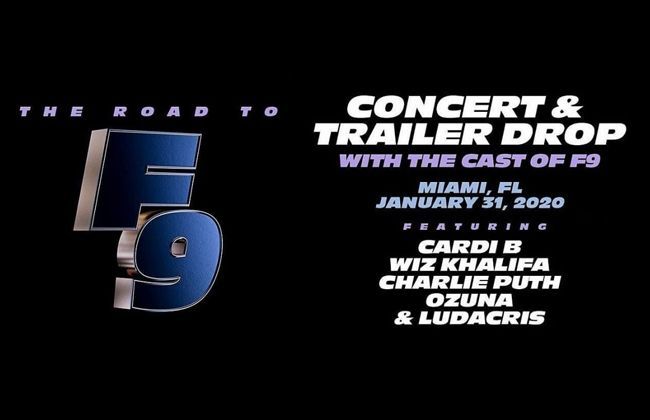 MANILA: The Fast & Furious series is now nothing short of a legend, isn't it? The movie has already seen 8 of its chapters rule the theatres. And now, with Justin Lin set to direct the ninth and the tenth chapters of the series, the fun is going to be all that more. Yes, Lin is the same guy who gave the series a new life with The Fast and the Furious: Tokyo Drift. Lin went on to direct 4th, 5th, and 6th chapters of the series before  James Wan and F. Gary Gray for "Furious 7" and "Fate of the Furious", respectively.

On  January 31, 2020, Dodge and Universal Pictures will feature the movie’s cast and drop its trailer at a mega event called the "Road to F9" in Miami, Florida. The show will be hosted by Tyrese Gibson, Fast & Furious franchise's member, and  Maria Menounos, an American entertainment reporter, actress, television personality, professional wrestler, and businesswoman. Moreover, the centre of attraction will be the music concert that will feature the likes of Cardi B, Ozuna, Charlie Puth, Wiz Khalifa, and Ludacris, a Fast & Furious cast.

Wait, there is even more. The "Road to F9" show will also see personnel like John Cena, Vin Diesel, Jordana Brewster, Nathalie Emmanuel, Justin Lin, and Michelle Rodriguez adding more stars to the night. "The heart of the Fast & Furious franchise has always been—and will always be—family, and it brings me so much joy that our extended family will be with us to help celebrate the launch of this chapter. We are nothing without our ride-or-die fans, and we are thrilled that they will be in Miami to welcome old- and new-school cast and crew, as well as usher in a brand-new era of Fast & Furious," said Vin Diesel.