A tale of 2 EcoSport Titaniums With traffic congestion going on almost 24/7 and flash floods becoming more common, it is time to be smart and look at the type of vehicle you drive on a daily basis.

A typical Point A to Point B vehicle, especially in urban scenarios, need not be fancy, large, so as not to require an unusually large engine — and by that I mean anything more than 1.5 liters.

Ford seems to have figured out just the right formula for that specific type of vehicle: Tall for flood protection, small and compact for the city, and with a small displacement engine for fuel efficiency and reduced emissions.

Launched in 2014 locally, the compact EcoSport with its small engine and tall ride height seems to be the answer to all of the above.

We give its Titanium trim, and the two variants it offers, a good look to see how low (of a displacement engine) of a and how high of a price you can afford to drive the top-of-the-line Ford EcoSport.

There are two variants to this trim and while both use a six-speed automatic gearbox, the Titanium AT (automatic transmission) uses a 1.5L engine with 121hp and 150Nm of torque while the EcoBoost Titanium AT uses the 1.0L EcoBoost engine that puts out 123hp and 170Nm of torque.

Both grilles have a chrome finish, but the Titanium AT uses halogen headlamps while the EcoBoost Titanium AT already has automatic HID (high intensity discharge) projector headlamps along with signature LED (light emitting diode) daytime running lamps. Both come with headlamp levelling, front and rear fog lamps, and silver-finish roof rails. 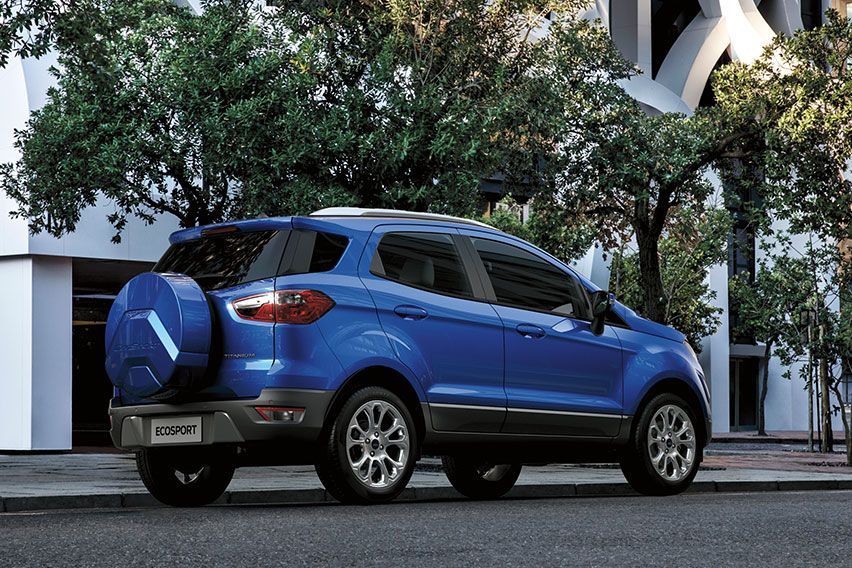 What needs to change is the position of the spare tire because it’s still mounted on the tailgate, which makes it appear cumbersome and physically heavy to open up. Because of the weight, there’s no opening it halfway if you just want to sneak a small bag in. If you take long enough, three seconds or more, it will slowly swing all the way open, so be careful if there’s a wall or obstruction on the left rear side of the vehicle.

Limited to the EcoBoost Titanium AT are rain-sensing windshield wipers and an electrochromic rearview mirror.