Should you pick a bike over a car? - An Analysis 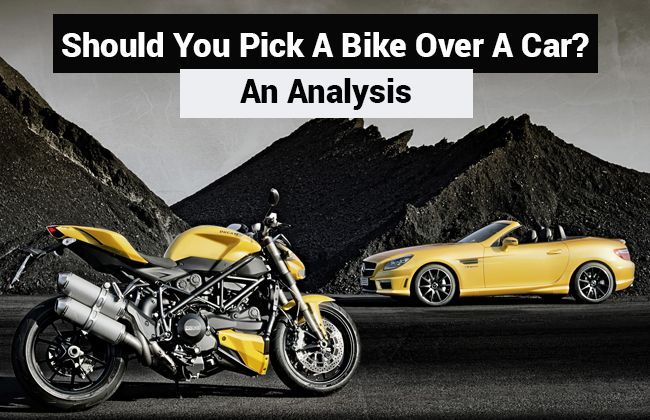 Which one is better, a motorcycle or a car?

With the hullabaloo in the traffic situation and public transportation, commuting in the Philippines can be quite problematic. At this rate, you’re probably thinking of buying a car or a motorcycle to have a faster and lesser hassle means of transportation. But, which one is more ideal?

Both motorcycles and cars have been around for more than a century already. Amusingly, with the advent of technology, both are now equally becoming aggressive in terms of innovation, advancement, and availability.

Therefore, considering all the aspects, which among the two is better and more economical for you to buy - is it our two-wheeler buddy or our four-wheeler companion? To help you out, here is a head to head analysis on both motorcycles and cars when it comes to various aspects:

Most motorcycles are by far cheaper than cars. This is pretty much obvious given the difference in sizes unless we will compare a premium motorbike from a common sedan. But generally, motorcycles are more affordable and have easier payment schemes. Motorcycles in the Philippines usually range from P 35,000 to P 120,000 depending on the brand and the inclusions while cars are usually priced at a minimum of P 600,000 to P 5 Million.

Moreover, the long term cost is also not a problem for motorcycles. It is pretty much cheaper to maintain a two-wheeler than an automobile since it significantly uses less fuel and engine oils to function. Parts and repair services for motorcycles are also less pricey unlike cars that when worse comes to worst, it might burn a hole in your pocket.

Verdict: Motorcycles are cheaper and more pocket-friendly than cars.

When it comes to the technology department, cars have plenty of features to boast about. Considering the size, motorcycles have no ample space to store lots of technological features. Although some motorcycles right now have digital instrument panels and some additional ports where you can charge your phone, the technology present in most cars is still unmatched.

Most cars right now have touchscreen displays where you can connect your phone through Apple CarPlay or Android Auto and is supplemented by a sleek set of speakers. Driver’s assistance features are also a major thing for cars right now as it enables smoother and smarter drives. Nowadays, cars usually have auto-folding rearview mirrors, automated air conditioning system, and even specialized sensors to detect possible obstructions or collisions. Some car models even took it to the next level like the 2019 Ford Mustang's all-digital instrument console where you can personalize and even change the layout of your car's important gauges.

As for some motorcycles, the usual light and horn switches are still the things that you will find in its handlebars. Although some are now taking baby steps towards having more high tech motorcycle models like the Honda PCX 150, cars have already led the race eons ago in terms of technological advancement.

Verdict: Cars are more advanced and capable when it comes to technology and driver-assist features.

This aspect can be more subjective in the sense that all people have their own preference and basis on achieving both comfort and convenience. Some people may find driving a two-wheeler more relaxing and while for some, driving a car is more fulfilling and enjoyable.

Motorcycles are technically easier to park and store while cars might take a little bit more of your effort. This can also be of great use especially when you are dealing with the worsening traffic situation here in the country on a daily basis. However, cars are covered and are good to drive whether it rains or shines.

While motorcycles are easier to handle and can easily be learned how to operate, it can be easier to lose balance. Not only that cars have air conditioning system but it also has plenty of space to put your stuff ~ not to mention that it can transport more people.

Statistics have shown that fatalities in motorcycle accidents are approximately 30 times higher than in car accidents. This is obviously caused by the lack of enclosure and safety features of motorcycles.

Since the unit is not covered, the passengers tend to be more vulnerable to accidents, rain, and even falling debris.

Moreover, most automakers install airbags around their car models and even added some automated controls over the engine, transmission, wheels, and even doors to ensure both security and safety of its passengers.

While some motorcycles nowadays are equipped with Anti-lock Braking System (ABS) already, the chances of being thrown off their vehicle are still relatively big. The lack of anything to shield the passenger poses both security and safety risks.

Verdict: There is no doubt that driving a car is far safer than driving a motorcycle.

Despite the big differences, it still depends on your own priorities and preferences if you choose a car or a motorcycle. After all, there are a lot of other factors that you should consider, like the budget, parking space, traffic situation, family size, and even the readiness to drive.

Still can't decide? Our website might be of great help! Take time to read our other articles about the latest in the automotive industry!