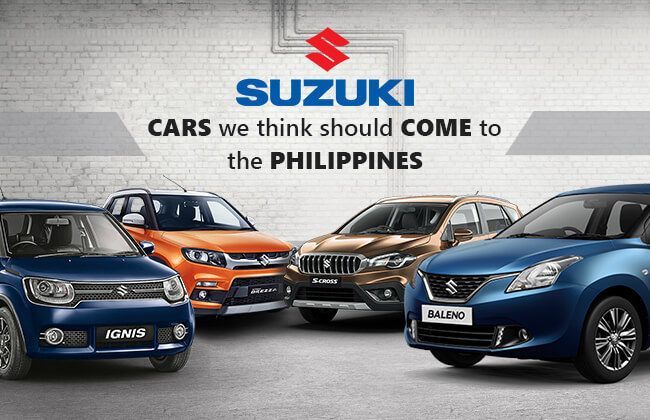 Suzuki has a wide repertoire of vehicles worldwide. Did you know that just a handful of them make it to the Philippines? There are some very capable as well as desirable cars which we think will make for great additions in our Philippine garage. Suzuki has forged a partnership with Toyota recently and while the first product will be an electric vehicle, the car is coming out only in 2020.

As for a matter of fact, the Indian subcontinent has become the manufacturing hub for Suzuki. In fact, the number of vehicles manufactured there accounts for 40 percent of Suzuki’s sales. The cars are also exported to other countries, including the Philippines. So, without further ado, here is a list of cars which we think will look equally good on the Philippine roads.

This one is a global product and Suzuki revealed it at the Paris Motor Show in 2015. Suzuki, for a very long time, manufactured the Baleno only in India. The Baleno is also the first car to have been exported to Japan from India. It is built on the HEARTECT platform and is lighter than most of its competitors. The Baleno competes with cars like the Honda Jazz and Hyundai Kona. It is a premium hatchback. If records are to be believed, world over, the Baleno has amassed close to 100 accolades. The car has decent space, a very long equipment list which includes projector headlights, steering mounted controls, touchscreen infotainment system which supports Apple CarPlay, rear AC vents, 343 litres boot space and an enviable design.

The Baleno is due for a facelift and we hope that this hatchback does make its way to our market as well. The engine options are 1.2-litre naturally aspirated petrol and a 1.3-litre diesel unit good for 75 PS. A 5-speed manual and CVT are offered with the petrol while the diesel comes exclusively with a manual. Suzuki shares that 1.2-litre motor with the new Swift and 2018 Dzire here in the Philippines. Given that the cars are lightweight, expect scorching performance and efficiency as well. ABS along with EBD and dual airbags are standard across the range.

The Ignis was part of Suzuki’s display at the Frankfurt Motor Show and came out as a concept. It was expected to be a Japanese-only model given its key car looks. However, it turned out that it became a global model. It was sold first in Japan, and then everywhere else, but the Philippines. The Ignis was launched with petrol and diesel powertrains. We are familiar with the petrol unit as it also does duty with the 2018 Dzire and Swift. This engine is a 1.2-litre unit that makes 84 PS of power. As we all know from experience, this is a very refined yet sporty performer. Suzuki offers a 5-speed AMT or manual as an option. The diesel engine is a 1.3-litre unit from Fiat. It is said to be a torquey mill and is also available with manual as well as automatic trims.

The Ignis looks likes a young Sumo fighter and is also quite nice to drive, they say. It is blessed with the same equipment as on the Baleno but the infotainment is a floating unit and there are LED projector headlights as well. One can also customise the Ignis. It will surely make for a snazzy addition for youngsters. The space inside the cabin is decent too. It could compete with the Toyota Wigo.

Crossovers are the rage everywhere. This one is a bit bigger but nonetheless has been a rage worldwide now. In its third generation now, the Suzuki S-Cross has seen a sedan being built off its platform, a hatch, and a crossover. It is the latter that we are interested in. After the facelift it recently received, there is a BMW resemblance to the grille. The overall shape outside as well as inside is just right for our conditions. The cabin looks similar to the Baleno’s but there are changes. The seat height keeping in mind that this is a crossover is set high, the infotainment system and a few switches are shared with the Baleno. There is also auto wipers and headlights. The space at the back and boot is appreciable too.

Unfortunately, this one comes with only a 1.3-litre diesel engine that gives 90 PS with 200 Nm and is mated to a 5-speed manual. The diesel is highly effective especially given that there is a Suzuki Smart Hybrid Vehicle System that acts as a hybrid. In some countries, the car is also offered with a turbo petrol engine with a 6-speed dual clutch being offered. In the Philippines, it could be a good competitor to the Mazda CX-3.

The Suzuki Vitara Brezza is modelled under the bigger Vitara and brings along the same upright styling. You wouldn't trust us if we said that this one does 10,000 units in a month. It was launched in 2016 and has been consistent with those numbers. All this without an update. The engine is the same diesel from the S-Cross but minus the fuel-saving tech. It has decent space in the cabin and boats auto AC, rear AC vents, colour configurable meters and many cubby holes. It has that proper SUV stance too. The ride quality is a tad on the stiffer end and is a proper trade-off for the stellar handling. Suzuki offers a 5-speed manual and now recently an AMT with this engine. It is decently fuel efficient as well. The main competitor for this car in the Philippines will be the Ford EcoSport. Given Suzuki’s nifty pricing strategy, the Vitara Brezza will undercut Ford’s prices too.

It will be easy for Suzuki to manufacture these cars at PH. Almost all of them can be optioned with a single petrol engine and if the need arises, the same diesel engine can be used as well. Given that Suzuki imports most of the cars, it will be fair that they add these vehicles to the mix. There are a couple more vehicles in there too but then we think the Philippines market can do well without them as well. Let us know which of these Suzuki cars do you find alluring and think should be in our market soon. We will try and convey the message to Suzuki PH.