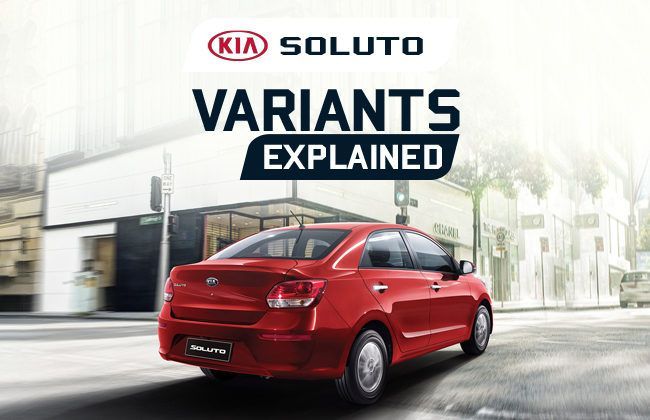 In an attempt to give its sales figures a push, Kia Philippines brought the new 2019 Soluto. This subcompact sedan might be the company’s first sedan in our country, but it is already being sold in China since 2017 with a moniker

'Pegas'. The Soluto is also Kia and Ayala Corporation partnership’s first offspring. It is based on the platform of the Picanto hatchback which is also available for purchase at a starting price of Php 635,000.

The 2019 Kia Soluto was launched in the Philippines earlier this year. Its model lineup has a total of 4 variants - LX MT, LX AT, EX MT, and EX AT. There is a price difference of Php 110,000 between the base and top-end model. There are certain features that come as standard across all the models, whereas some models have got a few added goodies.

In terms of looks and aesthetics, the Kia Soluto scores satisfactory marks. At the front, it features Kia’s signature grille that we really like. Then we have got a sporty body-colored front bumper which comes with fog lamps in the EX models.

The slightly aggressive-looking headlamps do their job in enhancing the car’s road presence. To keep the price in check, Kia has stuck to halogen headlamps instead of opting for LEDs.

The side profile of the Soluto is kept a bit busy with a subtle design on the bottom portion of the doors. Talking of the doors, Kia has used chrome door handles in the EX models. Also, the side mirror-mounted turn signal lights have been kept as a premium feature and are available in the EX series only.

The wheels on the LX variants are 14-inch steel units whereas the ones on the EX models are of the same size but are alloys. The rear end of the Soluto is a bit simple and might not be able to ignite a spark in the youth. It has a set of two-piece combination tail light and body-colored bumper.

Kia has done a good job in managing the cabin space in the 2019 Soluto. There is a generous amount of space for all the occupants. One of the most interesting features that we found in the 2019 Kia Soluto specs sheet is the 7-inch touchscreen infotainment system.

It comes as standard in all the 4 variants and offers support for Apple CarPlay and Android Auto with voice control. We don’t get to see this easily even in higher spec cars. Good job, Kia. There is also Bluetooth connectivity for handsfree calls and 6 speakers.

One primary element that is common in all the variants is the engine. The 2019 Soluto is powered by a 1.4-litre Kappa dual-CVVT engine that produces a max power of 94 hp at 6000 rpm and generates a peak torque of 132 Nm at 4000 rpm. And as far as the transmission is concerned, there are two options - 5-speed manual and 4-speed automatic. Both the LX and EX series are available in either type of gearbox.

Kia has not differentiated the 4 variants of the Soluto when it comes to the safety features. All the models come with dual front airbags, ABS, child seat anchorage, and rear door child locks. The LX trims have rear parking cameras with guidelines whereas the EX variants get added extra proximity sensors and an immobilizer.

However, we would have liked to see some more features in this department which could have given the Soluto a better chance in competing against its opponents.

Kia has tried to make its place in the dog-eat-dog market with its 2019 Soluto. It is a fine car with good features; some of which aren’t available in its rivals. However, there are certain areas where it lacks, like safety features. Still, we think that it is a nice value-for-money subcompact sedan. The 2019 Kia Soluto price starts at Php 625,000 for the base model and rises all the way up to Php 735,000.