Best of the cheapest: Sub-compact sedans under Php 700,000 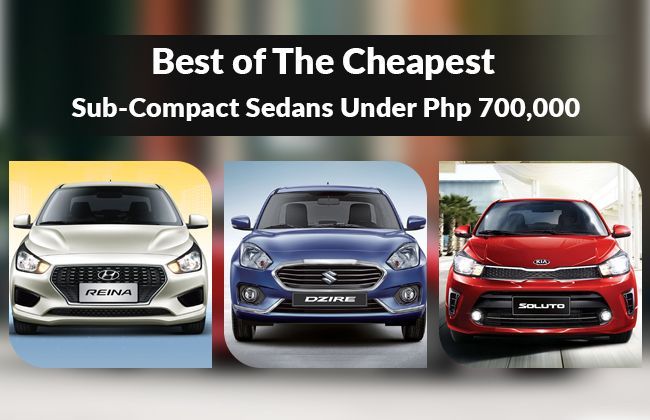 The number of cars on our roads has increased tremendously over the past few years. This is one of the reasons that we have dense traffic and clogged up streets almost everywhere. And this is also one of the reasons why people prefer a sub-compact sedan over a proper sedan or an SUV even if they have the need resources. Perhaps, that’s why the sub-compact sedan segment in the country is doing so well.

Just like any other segment, the sub-compact sedan segment has numerous vehicles, some of which have been priced quite dearly. In this story, we will share with you the best of the cheapest sub-compact sedans that fall under the price tag of Php 700,000 and are currently available in the country.

Trying to grab a good share more attention in this segment, Hyundai has got its Reina. The Reina is placed below the Hyundai Accent in the food chain and thus, is approachable by a much wider audience. It is available in two variants - GL 5MT and GL 4AT. Hyundai has implemented its Fluidic Sculpture 2.0 design philosophy in the Reina which makes it quite a looker.

Setting our eyes on the Hyundai Reina specs, what we find is a 1.4-litre engine which produces 95 PS of maximum power at 6,000 rpm and 132 Nm of peak torque at 4,000 rpm. The Reina is available with either a manual or an automatic gearbox depending on the variant you pick. To keep the price in check, the Reina has got dual SRS airbags and ABS as the primary safety features. The Hyundai Reina price starts at Php 638,000 for the base model after Hyundai recently decided to hike the prices of its cheapest sedan in the Philippines.

The Soluto is a special car for Kia because it’s not only the brand’s first launch in 2019 but also its first-ever sedan in the country. Available in a total of four variants - LX MT, LX AT, EX MT, and EX AT, the Soluto is one of the best looking cars in the sub-compact sedan category. The likes of the signature grille at the front, a sporty front bumper, and features like electrically adjustable outside rearview mirrors with LED repeaters, chrome door handles, projector fog lamps, etc., make the Soluto even more desirable.

The interior of the Soluto offers a dual tone theme which should appeal to anyone interested in cars that fall in this segment. There is a 7-inch touch screen infotainment system to keep you engaged. As far as the cabin space is concerned, with a length of 4,300 mm, there is plenty of room for everyone. The Kia Soluto specs have a 1.4-litre Kappa dual-CVVT engine that has been tuned to churn out a maximum power of 95 PS at 6,000 rpm and a peak torque of 132 Nm at 4,000 rpm. There are two transmission options - four-speed automatic and a five-speed manual. The Kia Soluto price starts at Php 625,000 for the base model.

How can we discuss sub-compact sedans and not talk about the Suzuki Dzire? The Dzire is one of the best selling products of Suzuki not just in the Philippines but in many other countries as well. And the new model has made things even sweeter. Available in two variants - GM MT and GL PLUS AGS. The Suzuki Dzire specs mention a single petrol engine as Suzuki has opted to ditch the diesel mill. The petrol engine here is a 1.2-litre unit that produces 83 PS of maximum power and 113 Nm of peak torque and gets mated to either a 5-speed manual or a 5-speed automatic gearbox.

The new Suzuki Dzire also comes with a major improvement in the design department. It is much better looking and has a touch premium-ness to it. Suzuki has also updated the interior on the new model making it more modern and convenient. We also like the flat-bottom steering wheel that adds a bit of sportiness to the Dzire. The car comes with a 7-inch infotainment system but unfortunately, it doesn’t support Android Auto or Apple CarPlay. The Suzuki Dzire price for the base model is Php 638,000, whereas the range-topping model will set you back by Php 698,000.

These were the best of the cheapest sub-compact sedans that you can buy under Php 700,000. They are not perfect but they do offer one or the other good feature to stand out from the others.