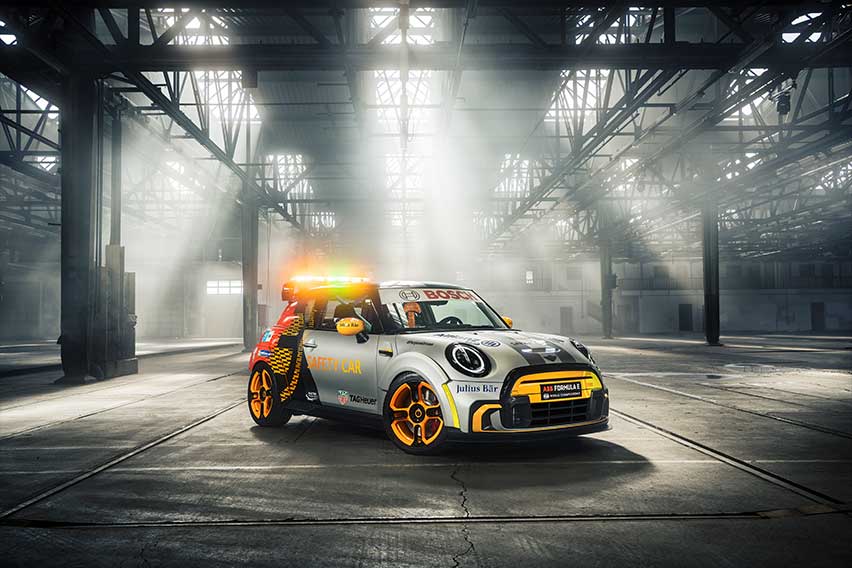 MANILA: The Mini Electric Pacesetter inspired by JCW is set to have its racetrack debut in Rome on Saturday, April 10 at the second event of the 2021 season of the ABB FIA Formula E World Championship race series.

The Mini Electric Pacesetter inspired by JCW is the newest safety car for the Formula E race series. It was developed by combining the brand’s electrified future and the legendary racing history of John Cooper Works. The car was fabricated from the new Mini Cooper SE as part of the groundbreaking collaboration between Mini Design, BMW Motorsport, the FIA, and Formula E.

In a statement, Mini Head Bend Korber said, “We have already shown how well driving fun and electric mobility go together with the Mini Electric. However, the Mini Electric Pacesetter inspired by JCW goes at least a step further and blends the performance character of the John Cooper Works brand with electric mobility. This extreme version of the Mini Electric has been developed as the Safety Car for Formula E, so is clearly not intended for use on public roads. But it does reveal one of the directions we could take with the electrification of the JCW brand. For me, the message is clear: electrification and John Cooper Works are a good fit.”

The car’s exterior was purposely designed to showcase the most dynamic interpretation yet of a Mini with fully electric power. Mini Design Head Oliver Heilmer explained, “The design is an exciting symbiosis of technical precision and emotion. Here, function dictates form, and many design elements have been shaped by technical considerations. For example, we worked closely with our colleagues at BMW Motorsport to develop the form of the wheel arches and front and rear aprons, and the optimization program for them included weight-saving measures. This visually striking, technically precise design language gives the car its pervasive sense of emotional engagement and excitement.”

The Mini Electric Pacesetter inspired by JCW features traditional Mini exterior details such as the circular headlights and hexagonal radiator grille. To incorporate signature John Cooper Works elements, the car is designed with wheel arches that were adapted to the track width and deep front apron with additional front splitters to the left and right. The Safety Car’s white flashing lights are harmoniously connected into the bonnet. The car is also designed with the Mini bonnet stripes that extend over the roof to the rear end.

The Mini Electric Pacesetter inspired by JCW showcases an exceptionally dynamic silhouette from the side. The car’s geometrically accented spats and sporty side skirts give it a powerful appearance even when stationary. These elements, together with the car’s bigger wheels, intensify the long-lived Mini “stance on the wheels.” The spats and spoilers were manufactured in Oxford. These were 3D-printed from recycled carbon fiber. The car is also designed with yellow accent lines and surfaces on the aero elements that represent the airflow optimization that happens in these areas. The vehicle gets a set of lightweight 18-inch wheels in black-neon and orange design that enhances visual depth and intricacy.

Even the colors that were used on the car signify the merging of the Mini Electric and John Cooper Works brand. While the main body is designed matte silver, the rest of the body up to the rear is covered with a high-gloss wrap with a Highspeed Orange to Curbside Red gradient. The contrast between the matte and gloss finish enhances the smoothness of the silhouette, while the diagonal separation lines that border the colors intensifies the dynamic look. The flanks are designed with a checkered flag pattern with a large Mini Electric logo, which is also embellished on the radiator grille, on the roof, and at the rear end. The vehicle is also designed with the safety car brief, which further highlights its racing image.

The Mini Electric Pacesetter inspired by JCW also features a striking rear end which is colored in black and Curbside Red with yellow accent surfaces. Its signal light unit also comes with an eye-catching roof-mounted rear wing with air through flow and yellow accent lines 3D-printed at Oxford. The gleaming wheel arches harmoniously adapts into the prominent rear apron, which was designed with cut-outs to clear the view to the higher-grip racing tires. In between the wheels is a plain diffuser. The accents in Energetic Yellow and absence of exhaust tailpipes underscore the car’s distinction of being fully electric powered.

On the inside, the car is installed with a certified driver seat that comes with a six-point belt for both racing and road use. The steering wheel comes with a minimalist-design carbon-fiber impact absorber. The driver’s area also features a digital instrument cluster. Meanwhile, the center console contains the gearshift lever, handbrake, and necessary signal light controls. The cabin is also designed with carbon-fiber door panels with window and door openers that come with cloth straps to ease the closing of doors. Although the interior structure is stripped-out, it features welded-in roll cage to heighten the safety inside the cabin.

The car also features custom-made interior components such as the steering wheel’s minimalist impact absorber, the boost panel on the right-hand side of the wheel, the center console cowling, and the door paneling on the driver’s side. The sport seat comes with 3D-printed removable pads which are customized based on the physiognomy, weight, and preference of the driver.

BMW Motorsport took care of the driving capabilities of the Mini Electric Pacesetter inspired by JCW. Because of its lightweight design elements, the vehicle comes with a curb weight of approximately 1,230kg, which makes it lighter than the standard Mini Cooper SE. The vehicle’s drive system is mated to a single-speed transmission. It generates 135kW and 280Nm of torque, which gives the car the ability to accelerate from zero to 100kph in 6.7 seconds and from zero to 60kph in 3.6 seconds.

The drive system is also partnered with racing coilover suspension (three-way adjustable for rebound, compression, height, and camber). The vehicle also comes with the four-piston brakes and wheels from the Mini John Cooper Works GP with Michelin Pilot Sport tires. These tires are the ones that are used in the front wheels of Formula E racing cars.

“Agility, performance, a cool looking car: the Mini Electric Pacesetter Safety Car for the FIA Formula E World Championship has got it all. It’s very fun to drive, it feels like karting,“ Correia stated.