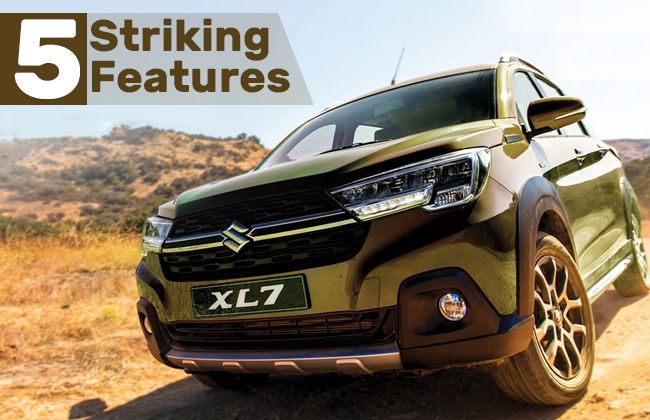 Suzuki Philippines wants to make compact vehicles a trend in the traffic-jammed roads of most urban cities of the Philippines. The Japanese automaker recently announced the launching of two new compact addition to its portfolio— the Suzuki XL7 together with the Suzuki S-Presso.

The Suzuki XL7 is a compact crossover SUV or multi-purpose vehicle (MPV) that is largely based on the popular Ertiga. This compact vehicle is powered by a 1.5-liter 4-cylinder K15B gasoline engine that can churn out 103 hp of output at 6,000 rpm and 138 Nm of peak torque at 4,400 rpm. The engine is mated to either a 4-speed automatic or 5-speed manual transmission. Though the engine might not be as impressive as compared to other five-seater crossovers or mid-sized SUVs, take note that its closest rivals— the Toyota Rush and Honda BR-V are almost similar in power and torque output. What other striking features set the XL7 apart from its competitors? Below are our top picks.

The Suzuki XL7 embodies the rugged look you’d expect from a crossover SUV. The robust styling begins in the front bumper which features heavy crease lines at the edges. The black front grille is split by two narrow chrome lines with the Suzuki badge in the middle. On either side is the quad chambered LED reflector headlights equipped with integrated LED daytime running lights. Below it is the front skid plate flanked by front fog lights. The bold front is accentuated by robust front fenders with garnish. At the back, is a top rear spoiler with an LED tail lamp and below is a rear skid plate.

The all-new Suzuki MPV offering is larger than its predecessor— the Suzuki Ertiga by a significant amount. The XL7 measures 4,450 mm long, 1,775 mm wide, and 1,710 mm tall while the Ertiga, for comparison, measures 4,395 mm long, 1,735 mm wide, and 1,690 mm tall. What is more, the XL7 has a higher ground clearance at 200 mm—a 20 mm difference than that of the Ertiga. This means you get to navigate the XL7 in shallow flooded roads and enjoy a smoother ride with less bounce when navigating on rough roads and potholes.

Connectivity for every passenger

People nowadays want to remain connected as much as possible so it is essential to be able to charge phones and gadgets anywhere, especially when you are on the go. With the Suzuki XL7, there’s a 12V power socket scattered around the vehicles. There’s a 12V power socket in the front, middle, and even on the third row so whenever you are seated on the vehicle, you have the ability to charge up.

With Pinoy’s penchant for maximizing the weekend and getting out of the city for a short breather, being able to haul a large amount of cargo is a must. Boot space is 153 liters when all third rows are used. When the third-row seats folded, the cargo space can be further increased to 550 liters of usable space.

Another awesome feature of the Suzuki XL7 is its seating capacity. Just like the Rush and the BR-V, the XL7 can seat seven passengers with ample legroom—even on the third row. This means a comfortable ride even for those long trips. Another feature is the flexible seating arrangements. Second and third-row seats can be folded and reconfigured to fit both passengers and cargo.

Okay, so the price is not a defining feature of the car itself, but hey, it is one of the major factors to consider when purchasing a new vehicle. The all-new Suzuki XL7 has a starting price of Php 1.068 million. With barely reaching the one million peso mark price tag, you can get a crossover SUV that can seat 7 people! How affordable is that, right? But what is more, if you reserve from March 1-18, 2020, you can avail of a Php 30,000 discount which will bring down its price even more. To know more about this promo and further inquiries, you may visit Suzuki Philippines’ website, Facebook page, and or a dealership near you.

Suzuki XL7 Alert me when launched