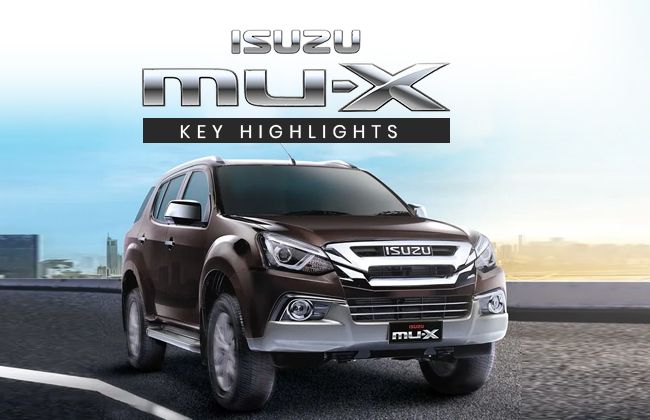 Isuzu’s seven-seater lifestyle sport utility vehicle (SUV) is one of the most sought-after nameplates under the Japanese vehicle manufacturer’s banner. Filipino families have patronized the Isuzu mu-X because of its perfect marriage between comfort and practicality. It boasts stellar performance with its superior power plant plus a slew of relatively outstanding features to match. It is the perfect recipe for a midsize five-door SUV to drive daily and to haul friends and family with a bag full of groceries.

Launched in the local automotive market sometime in September of 2014, the Isuzu mu-X offered the perfect replacement for the then fan-favorite Isuzu Alterra. However, one might notice that the Isuzu mu-X may look like a different midsize SUV from a distance, say the Chevrolet Trailblazer perhaps? That’s because the Isuzu mu-X was developed in partnership with GM and Isuzu. It once endowed the mu-X with the same platform with a majority of its body panels similar to the American car company’s midsize SUV offering. Today, Isuzu mu-X's name is the representation of ability and smart engine technology. With just over five years under its belt, Isuzu’s lifestyle-oriented SUV has proved to be a tough contender in the Philippine midsize SUV segment.

On the fence about whether driving home the Isuzu mu-X? Check out some of these key features that make the mu-X a perennial option for prospective car buyers since its release.

Top-tier features for the tech-savvy

Especially when you reach the top-spec variants, you’ll find substantial and significant features centered around safety and security.

The Isuzu mu-X specs sheet features an eight-inch audio-video infotainment system that’s Apple CarPlay and Android Auto ready. It also offers Wi-Fi display features as well as USB Link and the ever-handy navigation system, so you won’t get lost in the unforgiving concrete jungle that is the Metro. Passengers at the back also get a slice of mobile entertainment through a 10-inch roof-mounted monitor that will keep both kids and the kid at heart occupied during long drives.

Digital nomads who basically live in their vehicles will find that they can recharge the laptops they use as well as other advanced gadgetry they keep using the USB charging ports and the 12v accessory socket located conveniently within reach.

A suite of safety features

If the infotainment package isn’t enough to get you into the mu-X bandwagon, the improved loadout of safety features you’ll find across different variants will make you want to take the Isuzu mu-X home right out of the dealership.

The mu-X is outfitted with hill start assist and hill descent control providing better control and operation in different driving situations. Not that you’ll find steep hills in the metro but it will surely help when lining up for mall parking or when crossing flyovers during rush hour. There’s also cruise control on higher-spec variants as well as anti-lock braking system and electronic brakeforce distribution coupled with brake assist. Electronic stability control and traction control system prevents rollovers as well as understeering and oversteering keeping you and your passengers safe especially when you’re running 100 to 120kph on the highway.

The Isuzu brand has earned a reputation in the local automotive landscape for its dependable and reliable diesel engines. The Isuzu mu-X proves to Filipino car enthusiasts that it’s the brand to beat when it comes to innovative and revolutionary power plants. The all-new Isuzu mu-X sport Isuzu’s RZ4E Blue Power engine is  a representation of the brand’s 80 plus years of manufacturing top-shelf diesel engines. It’s carefully developed to optimize two of the most important values of an engine:  power and torque. It runs efficiently, leaving as little carbon footprint as possible. It also boasts reduced noise and vibration, making it a silent but more than a capable diesel engine.

Adding to its benefits, the Isuzu mu-X's RZ4E Blue Power engine is fairly easy to maintain compared to other diesel engines on the market. The engine itself is outfitted with a purposefully-designed combustion system made out of diamond-like coated piston pins, paired with a clothoid curve combustion chamber. It’s also equipped with a new design that utilizes fracture-split connecting rods and diamond-like coated fuel injector needles that contributes to better fuel economy and fewer exhaust emissions. The new RZ4E Blue Power engine is cleaner, safer, and more sophisticated.

In terms of how much horses it has to offer, Isuzu mu-X's RZ4E Blue Power engine, fortunately, does not disappoint. It yields a maximum power output of 148hp and 350 Nm of torque. That’s more than enough for what you would want for a diesel-powered daily driver.

The Isuzu mu-X does check all the right boxes in terms of utility and comfort making it the ideal ride for most Filipino families.