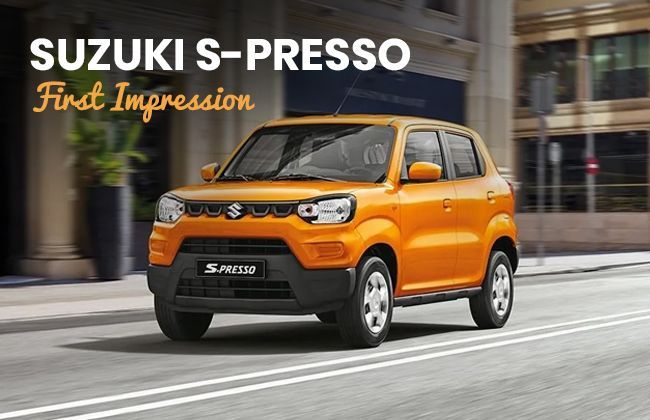 With specs, features, and a price to beat; the up-and-coming Suzuki S-Presso looks to sweep the competition and take the market by storm. Here’s our first look at the Suzuki S-Presso.

From the outside, the Suzuki S-Presso boasts bold styling with its strong character lines that define the overall dimension of the vehicle. It gives the Suzuki S-Presso a sporty profile that endows the subcompact crossover with improved road presence. The side panels appear to have been pushed to the upper extremities providing a heightened visual center of mass that’s paired which squared wheel arches giving the S-Presso's exterior a robust and rugged feel – closely resembling the 2020 Jeep Renegade.

Take a look at its dimensions

Suzuki claims that you’ll easily fall for the Suzuki S-Presso's unique center console the moment you step inside. They weren’t wrong, but it definitely isn’t everybody’s cup of tea. The center console houses seven-inch touch screen panel for audio with AM/FM, Bluetooth connectivity, and USB ports for saved audio files. Oddly enough, the speedometer is located above the S-Presso's touch screen panel which may take a bit of getting used to. Those who have been at the back of the steering wheel long enough will know that seconds spent switching eye focus matters. Nevertheless, power window controls, as well as hazard signals, can also be found in the central console panel. Sitting further below is the manual air conditioner control and an additional USB and a 12V accessory port.

Needless to say, all the controls are located at the central console which makes operating through the various functionalities of the S-Presso cohesive if not seamless.

The Suzuki S-Presso is outfitted with a modest K10B engine married to a 5-speed manual tranny. While it will show signs of stress when hauling heavy cargo, Suzuki’s K10B engine will breeze through the streets of the Metro even with five full seats.

The Suzuki S-Presso specs sheet offers decent safety features that will protect you and your passengers in the event of a crash. The S-Presso is built on Suzuki’s latest-generation HEARTECT platform offering lightness and rigidity and can efficiently disperse impact energy in case of collision. Centered around Suzuki’s TECT concept, the S-Presso employs high-tensile steel to protect driver and passenger in various road conditions.

For its price, the Suzuki S-Presso is arguably the most affordable vehicle in the segment. However, if you’ve been in one of any of its competitors, you’d see where and how Suzuki managed to bring the price down. Nevertheless, it did not compromise the overall safety and driving experience.

That being said, we the Suzuki S-Presso as a great option for anyone looking for a first car or a daily driver that won’t break the bank and while you won’t see top-spec subcompact crossover features you’re used to, the S-Presso proves it’s not the average cup of Joe.