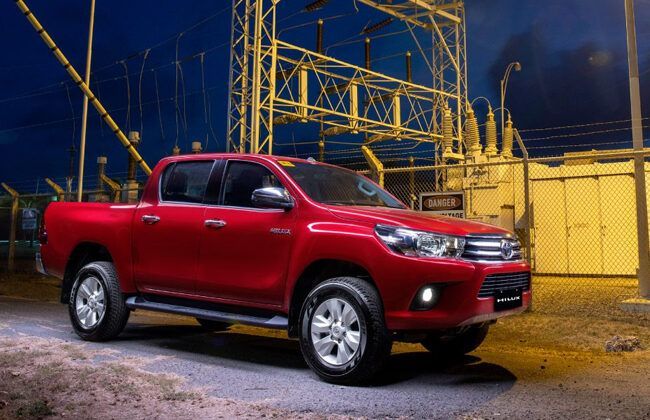 It has been more than 50 years when the first-generation Hilux rolled out. And since then, it was greeted with love by corporate and business consumers who need sturdy vehicles for their business or logistical fleet. Later on, the Hilux evolved as the needs of the market evolve.

The eighth-generation Hilux has moved forward to just being a utilitarian truck to become a family vehicle. The Toyota Hilux was first introduced in the Philippines in mid-2015. Back then it featured traditional gauges in the instrument cluster, fast forward to 2018, the facelift model was introduced here in the Philippines for the Conquest variant. What do we expect from a Hilux? Here are a few.

The Toyota Hilux sports a bold design that makes it look tough in conquering the paved road of the city and the tough off-beaten tracks with its built-in body protection and state-of-the-art bull bar coupled with faired-in lights, slatted front grille, and wide-type over fenders for that aggressive look. It is also built to haul stuff. And the muscle exterior is not just for show, the load bay is 1525 mm long by 1645 mm wide. And if whatever you’re loading doesn’t fit for some reason, the Hilux can also tow 3.5 tons of cargo. Expect your Hilux to come equipped with:

Behind the tough exterior is a pickup truck with an SUV cabin feel to make it a family-friendly vehicle. The engine is quieter than ever and stability is sublime, there is barely any vibration so you get to experience a smoother ride even if you are not carrying any load at the bed.

The illuminated entry system and smart entry/ push start system makes alighting and exiting easy even when it's dark. Cup holders and cubbies make the inside a little less cluttered even with kids in tow. Plus, the 6.5-inch Touchscreen infotainment display with 6-speaker radio and DVD player comes in hand for that long family drive to keep the little ones entertained. Multi-connectivity features include Bluetooth, USB & auxiliary input for added options.

The thing about the Toyota Hilux which rings true to almost all Toyota vehicles, in general, is it's highly customizable. You can easily modify the Hilux with Toyota-accredited accessories and after-sale kits. You can give it a more rugged look by changing the rims, adding steel bull bars and bed bars,

headlamp covers, snorkel, satellite navigation, and top racks to name a few. Besides that, Top of the line variant comes with exclusive colors to make it truly stand out from the rest. The eye-catching Nebula Blue Metallic and Orange Metallic color are only available for the Hilux 4x4 variants for differentiation.

The eighth-generation flagship Toyota Hilux is powered by a 2.8L Diesel, 4-Cylinder, 16-Valve DOHC Variable Nozzle Turbo with Front Mounted Intercooler with a displacement of 2,755cc. It can produce a maximum of 174Hp of power at 3,400rpm and 450Nm of torque at 1,600-2,400rpm. The engine is mated to a 6-Speed with ECT (Gate type Sequential) automatic transmission.

The heavy-duty suspension consisting of the double-wishbone in the front and a leaf spring rigid axle at the rear can deliver an incredible 49-degree corner approach angle that makes off-roading a breeze. Assisting the engine is a set of 18-inch alloy wheels wrapped in 265/65R18 tires to make driving a pleasurable experience even on the rockiest backroads of central Luzon, Muddy terrains of unfinished paved roads in the Metro, and steep terrains of the Cordilleras. Truly a very versatile and capable vehicle that not only transports but can perform.

The Toyota Hilux specs sheet is loaded with safety features to make driving a little less stressful and more enjoyable even on tough terrains or inclement weather. Driver-assist and safety features include:

Low-maintenance, durability, and reliability are some of the highest selling points for getting a Toyota Hilux or any Toyota vehicle for that matter. Maintenance is easy with nationwide dealerships for a complete Periodic Maintenance Service (PMS) to keep your Hilux in peak running condition, better fuel economy, longer vehicle life, and higher resale value.

These are just a few of the top features that we love about the Toyota Hilux. For a starting price of Php 1,506,000, for a Hilux 2.8 G 4x4 you can already get your money’s worth and so much more. But do not just take our word for it, better head to the nearest Toyota Dealership near you to learn more about the Hilux and take it for a test drive to experience driving it for yourself.