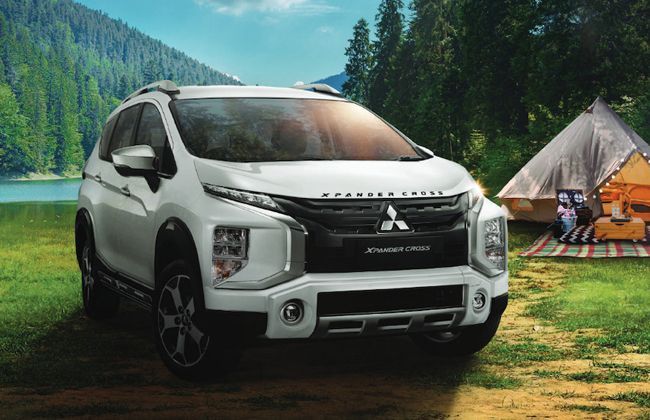 MANILA: If the Montero Sport will have a mini-version, the 2020 Xpander Cross is a spot-on candidate. As promised, Mitsubishi introduced its new SUV. Here's all you need to know about the Xpander Cross.

The new Mitsubishi Xpander Cross is a seven-seater MPV with an uncanny resemblance to its bigger sibling, the Montero Sport SUV.

In terms of design, the Xpander Cross is made to look like an SUV with its version of a Dynamic Shield with a new grille pattern atop a robust-looking skid plate that integrates the LED front fog lamps. A black body cladding in the lower apron continuously runs to the wheel arches, across the doors, and wraps seamlessly at the rear bumper.

A large rear skid plate and a black tailgate garnish under the rear window complete the outdoorsy look. Up top, the new MPV is fitted with a spoiler, shark fin, and silver-colored roof rails. Below, the sporty look is completed by a set of redesigned 5-spoke, 17-inch alloy wheels wrapped in large-profile tires.

To complete the aggressive look, the new Mitsubishi MPV boasts of a 225mm ground clearance, a 20mm height difference than the regular Xpander model. Besides the garnish, the new Xpander Cross will come in Graphite Grey and Sunrise Orange color. The latter being an exclusive color option to the new model. Both colors are available with a black/brown combination interior with silver mesh decorative trim.

If the outside is all about having a rugged SUV look, the inside cabin is reminiscent of a minivan with its spacious interior and soft-touch upholstery covers. The seats come in a 60:40 split-folding second row and a 50:50 split-folding third row that can be configured in many ways depending on passenger or cargo space requirements.

Other noteworthy features are the 7-inch center-mounted infotainment system that is Apple CarPlay and Android Auto compatible, folding armrests for the second-row seats, and storage cubbies to keep the inside organized. Safety and driver-assist features such as parking sensors with a rearview camera, a keyless operation system, ABS with EBD, active stability and traction control, and hill-start assist come standard. While cruise control is exclusive to the higher variant.

Under the hood, the new generation Mitsubishi Xpander Cross will run in a MIVEC DOHC 1.5-Liter, 4-cylinder naturally-aspirated petrol engine that can generate a maximum of 105 Hp and 141 Nm of peak torque partnered to a five-speed manual or four-speed automatic transmission.

2020 Mitsubishi Xpander Cross price and variants are as follows:

The 2020 Xpander Cross is assembled at Mitsubishi Indonesia’s Krama Yudha plant in Cikarang and will exclusively go on sale in Indonesia beginning tomorrow before it gets exported to other local markets in the Southeast Asian region. Who knows, maybe the Xpander Cross would make it to the Philippines just in time for Christmas.