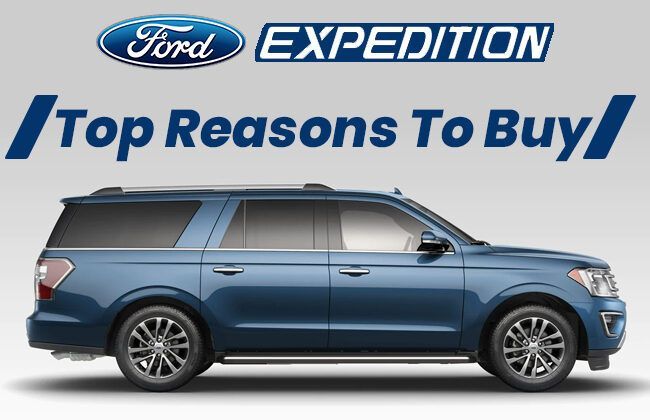 The all-new Expedition debuted at the 15th Manila International Auto Show with noticeable enhancements. It sports a redesign as well as improvements in performance, handling, and passenger safety. Like the smaller Ford Explorer, there’s a new platform beneath the flashy exterior.

Is Ford Expedition a good car?

If you want a full-sized SUV with off-roading capabilities and room to fit 8 passengers – then yes, it is a good car. Feature-wise, its fourth generation can now battel with the V8-touting Toyota Land Cruiser 200.

Not that Ford Expedition needs to prove itself given its features. Apart from its intimidating size or the fact that it’s one of the most popular Ford vehicles, you only have to take one look at it and you’ll know instinctively it’s a solid option even without the spec sheet.

Still, with a starting price close to Php 4.5M, you have to rely on more than just instinct to decide whether it’s worth your hard-earned money. Below, we’ve highlighted the top reasons why you should buy the Ford Expedition.

We’re not just getting the standard Expedition. Instead, Ford Philippines is gracing us with Expedition MAX4WD WITH BUCKET SEATS which by comparison, is longer and has a wider wheelbase.

Passengers won’t feel the difference since both trims have the same legroom, shoulder room, and headroom. But the Expedition MAX 4WD WITH BUCKET SEATS has significantly larger boot space, which we’ll talk about later.

The Expedition is built with the new T3 architecture designed for Ford SUVs. Its body is made entirely of aluminum alloy which, on paper, makes it 300 pounds lighter than the older model. Paired with auto start/stop technology and an EcoBoost engine that’s 30% more fuel-efficient than a naturally-aspirated engine, this massive vehicle is no longer the gas-guzzling beast it was previously known for.

Ford Expedition has a fuel economy of 21 mpg when cruising on highways. This goes down to 16 mpg in the city, resulting in a combined fuel efficiency of 18 mpg. For a vehicle its size, the Expedition is quite the fuel-saver.

Road accidents are unavoidable. But with Ford Expedition you have less to worry about. Hidden underneath the seemingly frail aluminium-alloy body is a high-strength steel frame that provides better protection against impacts.

In the event of a collision, the built-in SOS Post-Crash Alert System draws the attention of people nearby. It will repeatedly flashlights and sound the horn to ensure you get immediate help. Should the car flip over, rollover sensors will trigger the release of side curtain airbags.

Other safety features found in the Expedition include:

Ford Expedition packs an EcoBoost engine under the hood. The V6 powerplant is not only fuel-efficient. It delivers an incredible amount of power and torque which rivals engines with larger displacements, as seen in the engine specifications below.

There’s also a larger fuel tank inside the MAX 4WD WITH BUCKET SEATS, compared to the standard trim which can only accommodate 89 liters of gas.

Drivers can configure the Terrain Management System (TMS) so the vehicle can adjust its dynamics based on the pre-selected driving condition. There are four basic modes to choose from - Normal, Sport, Tow/Haul, and EcoSelect. Ford Expedition MAX 4WD WITH BUCKET SEATS also gets three additional modes so you can take it off-roads on grass, gravel, sand, and mud.

Driver-assist features such as adaptive cruise control, hill start assist, and reverse sensing are a standard on the Expedition. Combined with its suspension system, it allows for a smoother drive.

Its massive interior provides adequate space for 8 passengers, and we’re not just talking about getting enough “wiggle” room here. You can actually recline the seats and take comfy naps on long trips!

Living up to its reputation as a utility vehicle, Ford Expedition MAX 4WD WITH BUCKET SEATS gives you a maximum cargo space of 3,440 liters compared to only 2,961 liters on the standard edition. As mentioned earlier, the SUV owes its cargo space to its larger dimensions.

What’s more impressive is how this SUV manages to achieve its cargo space. You can push the second-row seats forward or set the third-row seats upright, and you will have a bit more room for additional cargo without sacrificing the seats.

The power-folding seats make it even easier to convert the Expedition from a passenger vehicle to a transport SUV, and vice versa. Ford Expedition also comes with a removable cargo panel which allows you to maximize the space behind the third row.

Ford goes beyond the usual touchscreen entertainment and aims for hands-free functionality. SYNC 3 lets you connect your iPhone with the system so you can control features such as music, calls, and more using Siri. You can also pair it with Apple CarPlay and Android Auto for seamless entertainment.

Ford Expedition gets a complete makeover. It still has that unmistakable jeep-like and intimidating look. However, it has cleaner lines and a more polished appearance than its predecessor. While it looks pretty basic, overall this is the best-looking upgrade yet and one that owners of the previous Expedition can look forward to.

Ford Expedition is not the cheapest car – that much is true. But coming from one of the oldest car manufacturers in the industry, it sets the bar for full-size SUVs.

The latest model brings a more powerful and fuel-efficient engine, as well as much-needed upgrades in styling, safety, and features. At its price, you get a practical all-around vehicle that you can take for long trips, camping, and off-road driving.

Jeepneys better move over. Ford Expedition is the real king of the road.