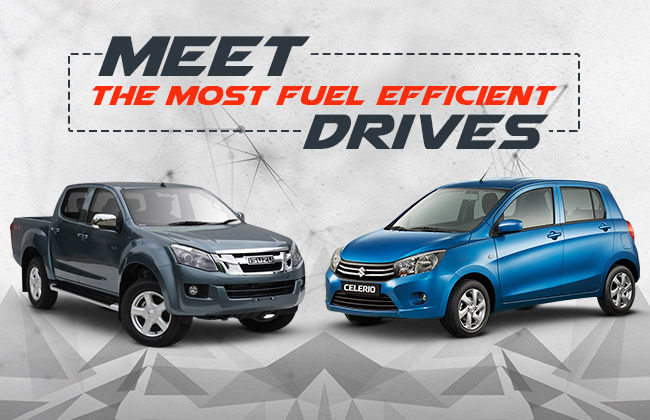 MANILA: On 27th May 2016, the Department of Energy (DOE) with the renowned Asian oil company - Petron Corporation, organized the Euro 4 Fuel Economy Run which went highly successful with the participation of 22 automotive manufacturers and 70 diesel and gasoline vehicles from them. With an intention to observe the most fuel economical drive available in the Philippines in both Diesel and petrol categories, this exercise was conducted. This was the first ever Euro 4 Energy Efficiency test conducted in the Philippines so far. Well, the run was conducted odd 20 days ago and finally the results have been announced by the organizers. In the diesel-powered vehicles' category, Isuzu D-Max has made its manufacturer proud by delivering a mileage of 38.46 kmpl while among the gasoline-fueled vehicles, Suzuki Celerio has taken the spotlight with a consumption of 29.14 kmpl. While Isuzu D-Max is already counted among the best contributor for rising Isuzu sales, Suzuki Celerio is known for its many advantages in the Philippines automotive market.

It was really an interesting event with all the leading mass market brands participating in it. Here's what this event was all about and its detailed results -

As stated above, this run was held on 27th May 2016 in association with Petron Corporation. The main motive behind organizing this event was to strengthen the Philippine Energy Standards & Labeling program (PESLP). Out of the total 70 vehicles, which participated in this run, there were 38 petrol and rest 32 diesel fueled. The diesel-powered vehicles were filled with Petron Turbo Diesel while the petrol-powered vehicles were fueled with Petron XCS. Euro 4 Fuel Economy Run was a 300 km exercise, which was organized from midnight and dawn. The track was the Subic-Clark-Tarlax Expressway and the Tarlac-Pangasinan-La Union Expressway. This particular track and time were chosen intentionally so that there would be no other cars on the road and the participants can concentrate on driving and safety.

Just like any other competition, the organizers made certain rules for the participants to ensure safety and impartiality which were -

22 automotive brands participated in this fuel economy run to find the best from the lot. The brands participated through their respective dealers or distributors. Mahindra, Volkswagen, Volvo, Toyota, Suzuki, Nissan, Audi, Porsche, Tata, Isuzu, Mitsubishi, Hyundai, Honda, Subaru, KIA, Ford, Peugeot, Foton, BAIC, MINI, Mazda and Chevrolet were the names, which put their best models to the test and found the mileage achieved by them in the ideal conditions.

To ensure safety during the run and to keep a track on all the 70 vehicles, the organizers divided the lot into 2 categories – one for the petrol vehicles and other for the diesel vehicles. The diesel vehicles left a couple of minutes after the gasoline vehicles started from the start line. All the vehicles were filled to the best of their capacities and a safety seal was put on the fuel cap to avoid any manipulation. The leftover fuel in the tank was later measured by the organizers, after finishing the 300 km run, to find the mileage of each drive.

Among the 38 gasoline powered vehicles participated in the Euro 4 Fuel Economy Run, Suzuki Celerio proved to be the most fuel efficient while delivering 29.14 kmpl. This 1.0-litre DOHC 12 Valve engine mated with CVT is capable of churning out 67 hp of peak power at 6000 rpm and 90 Nm of peak torque at 3500 rpm. Surely this is one good news for the Japanese company, especially after its involvement in the Fuel-Emission Scandal.

Coming to the diesel vehicles, Isuzu D-Max LS 4x2 M/T model won the run with its remarkable fuel efficiency calculated to 38.46 kmpl. This drive houses a 3.0-litre turbo diesel unit under its hood which knocks out 163 PS of peak power at 3200 along with 380 Nm of high torque between 1800 and 2200 rpm. One interesting fact observed in this run was that 71 percent of the participated gasoline vehicles and 66 percent of the diesel drives were able to achieve a mileage of 20 kmpl or more during this exercise.

Surely this was one run, which realized the automakers where they stand and what they claim during the promos. Also, the Euro 4 Fuel Economy Run has helped the prospective customers to find the best efficient of the drives they are planning to buy. Guess, we Filipinos want more of such runs and rallies!