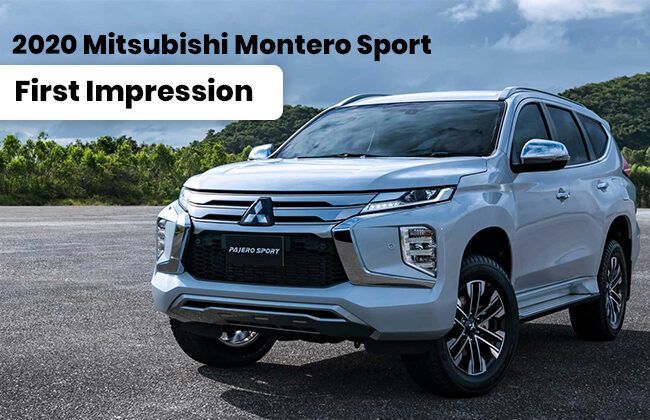 We caught our first glimpse of the 2020 Montero Sport when it debuted in Thailand last July. Now that Mitsubishi unveiled it to the Philippines, we couldn’t be more thrilled. Fans of the vehicle have highly anticipated its official announcement, as the SUV received its last update in 2016.

It’s been a long wait, so here is our first impression of the mid-sized SUV.

Mitsubishi has made significant design changes on the new Montero Sport. The front end now has a higher hood with the combined aesthetics of the Mitsubishi Strada and Xpander.

The rear end has also been adjusted to make room for the new bumper. Gone are the seemingly “crying” teardrop taillights, which was a deal-breaker for keen-eyed buyers. It also has an aggressive layout to match the front.

Overall, the 2020 Montero Sport has a more angular and intimidating look than its predecessor. You can expect to see the following changes in its external design:

Mitsubishi Motor Philippines Corporation (MMPC) is launching two model variants of the 2020 Montero Sport – the base model GLS 4x2 and the high-end variant GT 4x2. Below are their exterior features:

If we compare the new Montero Sport to the older model specs, the latest version is slightly longer and taller. It measures 40 mm (or about 4 cm) long and 30 mm (or about 3 cm) taller than the 2016 Montero Sport. However, both the previous and current model shares similar dimensions in terms of width, wheelbase, and ground clearance.

New Montero Sport specs receive much-needed upgrades for its interior. The traditional gauge found across Montero Sports models is replaced with a digital 8” LCD panel on the GT variant. And it’s fully customizable too! You can choose which information to display behind the steering wheel.

The small head unit in the previous model is replaced with a more comfortably-sized and user-friendly 8” Smart Audio Display. It features touchscreen capacity, an AM/FM Radio, and Tomtom Navigation, which you can use offline. The infotainment system also supports USB, Bluetooth, and smartphone connectivity for both Apple and Android users.

Unlike older models, the GLS and GT variants now have USB charging ports and a 220V power outlet so you can charge devices and electronic appliances in-between travels.

Here are some additional model specs for the GLS 4x2 and GT 4x2:

The following safety features included in the 2020 Montero Sport:

Top-of-the-line GT 4x2 gets a total of six airbags, while GLS 4x2 only gets dual-front airbags.

You probably think as it’s been four long years since last release, the 2020 Montero Sport will have a more powerful engine. After all, the Japanese brand has gone to great lengths redesigning the vehicle.

Unfortunately, the model’s newfound bravado is purely aesthetics as it retains its old engine. Under the hood, you will find the same engine – a 2.4L Turbo-Diesel In-Line 4 DOHC 16-Valve with VGT and MIVEC.

Now if you’re looking to get the GT 4x2 or GLS 4x2, there are five model colors to choose from:

Mitsubishi is slated to release GT 4x2 and GLS 4x2 in the Philippines with the following pricing. Here are new Montero sport price and variants:

If you feel that these two options are limited, there’s some good news as the Japanese brand is launching two more variants under the 2020 Montero Sports line – GLX 4x2 MT and the GT 4x4 which will arrive in Q1 of 2020. Once Montero Sport GT 4x4 hits the Philippine market, it will replace the GT 4x2 as the highest-end variant and may cost a little over Php 2-million.

Also Read: 2020 Mitsubishi Montero Sport - All you need to know