Nissan dropped a bomb on us by launching its new SUV, the Terra. The Terra was first showcased in China, where everything is preferred in XXL size, similar to the US auto market. Nissan latest 7-seater draws a lot of inspiration from the Navara pick-up. It is a thing of privilege that we in the Philippines get the more extended wheelbase version of the Nissan Terra. But on this particular dimension front, Nissan is slightly behind the other SUVs available in the market. It sure would not be easy for the Terra, especially with prime contenders like the Toyota Fortuner, the Isuzu MUX, the Ford Everest, and the Mitsubishi Montero Sport. For the sake of convenience, we have just compared it with the highest selling SUV in the segment, the Toyota Fortuner.

On paper, of course, we will have a full blown test at a later stage. Read on to find out how both the SUVs compare with each other in the specifications war.

We feel that the Nissan Terra is a bit staid in comparison to the flashy Toyota Fortuner. The Terra takes a more no direct departure from the pick-up’s styling as well. The rear of the car is a bit funkier than the front. All this being said, the Toyota Fortuner still aces the styling department and will be our pick.

Inside the cabin, the Toyota Fortuner falls a bit behind. It doesn’t look like it’s not a premium cabin but the Nissan Terra’s upholstery feels a bit better. There is also the modern day gadgetry that one will associate with a car of this size. A touchscreen audio system that is Apple CarPlay as well as Android Auto compatible, dual zone climate control, powered driver’s seat, and various storage spaces around the cabin are common to both. The Terra’s 2,850mm wheelbase is bigger than the Fortuner’s 2,745mm. The Terra is also longer at 4,885mm compared to the Toyota’s 4,795mm. This should significantly affect the last row seating space, and we assume the Nissan to be a tad more spacious than the Fortuner concerning the long wheelbase. The Nissan Terra also gets slightly bigger tyres at 18-inch whereas the Fortuner receives it as optional.

Both are ladder-on-frame SUVs, and we expect the ride quality to be similar. However, while the Fortuner’s motor is a tad noisy at full clip, we expect the Nissan’s unit to be a bit more refined in the cabin. Both are expected to be top-heavy SUVs, and it will not be advisable to take turns at high speeds with either of the two. You can order these SUVs either with a rear wheel drive configuration or with four-wheel drive. Both the SUVs also get a low ratio.

Speaking of which, the Toyota Fortuner employs a 2.4-litre diesel motor that is good for 147 PS and 400 Nm. There is a lone 6-speed automatic that is offered here. In contrast, the Nissan Terra has a bigger 2.5-litre four-cylinder diesel engine that makes 190 PS and 450 Nm. Buyers can choose from either the 6-speed manual and the 7-speed auto. However, given the lower kerb weight of the Fortuner and the lesser power output, it is likely that it will have a higher fuel efficiency. In terms of the 0-100 performance, both the manufacturers haven’t quoted a number, and neither are there any top speed claims. If you were to ask us, both the SUVs should safely give around 12 kmpl and have a top speed of 180 kmph.

In terms of safety, both the cars offer a plethora of aids like ABS, Hill Descent and more. However, it is the Nissan brings in more equipment per trim.

Prices of the Nissan Terra start from Php 1,499,000 while that of the Fortuner ranges from Php 1,565,000. It will be interesting to see how these two fares over the course of time. 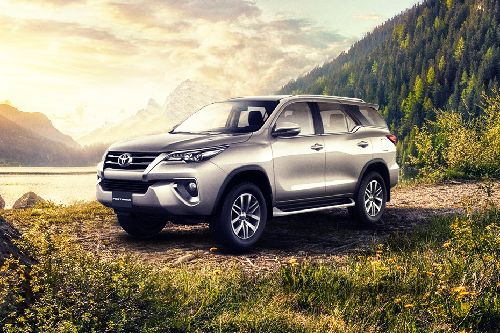